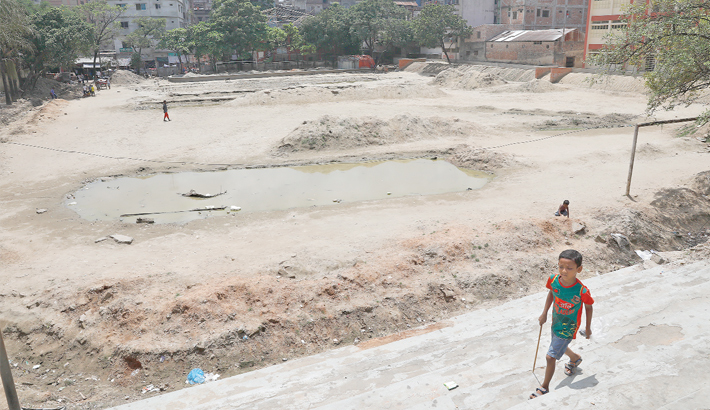 The development work of Bangladesh Maath, a playground adjacent to Aga Sadek Road in the capital, goes on at a snail’s pace depriving local youths of the opportunity to play physical games. The photo was taken on Monday. – SUN PHOTO

The “Jol-Shobujer Dhaka Project” (city covered with water and green), a project taken to modernise 31 parks and playgrounds by Dhaka South City Corporation, has been extended by a year in the face of ‘bad weather’, said an official.

According to DSCC authorities, the project work commenced in July 2016 aiming to build a series of infrastructures in the parks and playgrounds to offer healthy civic amenities to the city dwellers, particularly children and youths.

The project made a good start as a total of 70 architects prepared the draft designs to make 19 parks and 12 playgrounds more beautiful by adding more green space and removing the boundary walls. The project deadline was June 2018, which was extended till June 2019 showing the excuse of bad weather conditions.

The city corporation authorities said the implementation of the project was hampered by unfavourable weather conditions including heavy downpour since the beginning of the project.

The timeframe was insufficient. Apart from that, recruitment of consultants and other project activities faced delays for some unavoidable reasons, he told the daily sun on Thursday.

Amid the dilly-dallying with the project, many influential people and political leaders have been using the parks and playgrounds for commercial purposes.

A section of Malitola Park has been grabbed by the truck and covered van drivers and owners.

During a recent visit to the parks and playgrounds, many were found in bad shape as the project work remains halted for a long time.

Moreover, the DSCC this year allowed cattle markets on Sadeque Hossain Khoka playground and Golapbag playground, making the condition of the playgrounds worse.

The correspondent found no contractors, subcontractors and labourer in the project sites.

The project work began earlier in some parks and playgrounds. But there is a shortage of labourers after the Eid vacation and that’s why the project work could not resume in full swing, said the project director.

“I visited some of the project sites today and saw that the project work was in progress in Malitoal Park and Bangladesh Math,” he said, adding that necessary steps are being taken to free the grabbed land of Malitola Park.

The project director also expressed hope that though the timeframe has been extended to June 2019, the project will complete by December this year.

“We will modernise the parks maintaining the international standards by 2017,” DSCC Mayor Sayeed Khokon announced in 2016, adding that they will ensure free Wi-fi service and CCTV cameras in the parks and playgrounds.

Different varieties of trees will be ensured so that people can experience the distinctive features of all six traditional seasons simply by looking at the change of flowers like Krisnochura, Kadom, Radhachura and Bakul and so forth, project officials earlier told reporters.

Each park or playground will contain civic amenities like garbage management facility, water pump and public toilet. There will seating arrangement as well for hawkers in some designated spots, they also said.