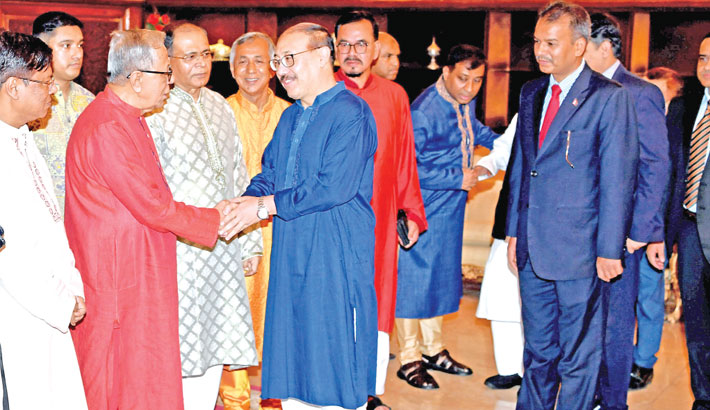 President Abdul Hamid exchanges greetings with Indian High Commissioner to Bangladesh Harsh Vardhan Shringla and members of the Hindu community at Bangabhaban in the capital on Sunday, marking the Janmashtami, an annual Hindu festival that celebrates the birth of Krishna, the eighth avatar of Vishnu. – PID PHOTO

President Abdul Hamid on Sunday urged the people of all religions to resist through social movement any attempt of creating anarchy in the society in the name of religion, reports UNB.

He made the call while exchanging greetings with members of the Hindu community at a reception at Bangabhaban marking the Janmashtami, an annual Hindu festival that celebrates the birth of Krishna, the eighth avatar of Vishnu.

“Religion leads people to the way to truth and right and inspires people for human welfare. No religion supports militancy, fundamentalism or terrorism,” he said.

President Abdul Hamid also urged the people of all religions to remain alert so that no person or group can impede the social discipline using the religion.

The head of the state asked all to build strong social resistance if anyone tries to create anarchy and simultaneously urged all to continue collective endeavour to keep up the trend of national development and progress.

The President also asked people to maintain communal harmony at any cost as the participation of all people irrespective of religions, castes and creeds accelerated victory in all struggles and movements including the country’s great Liberation War.

He stressed utilizing the non-communal spirit to build a happy and prosperous Bangladesh envisioned by Father of the Nation Bangabandhu Sheikh Mujibur Rahman.

“Communal harmony is our great tradition which strengthens the existing harmony and friendship more in the society to build a happy and a prosperous Bangladesh for the present and future generation,” he said.

The President said that all religious festivals are celebrated with fervor and gaiety in Bangladesh. “Each festival becomes universal with the spontaneous participation of all religious minded people. This spontaneity has helped build social bonding,” the President added.

Greeting the people of Hindu community on the occasion, the President mentioned that Sri Krishna emerged as social reformer to thwart evil forces and to protect religion and good people in the society.