Educational visit to Houses of UK Parliament and Supreme Court 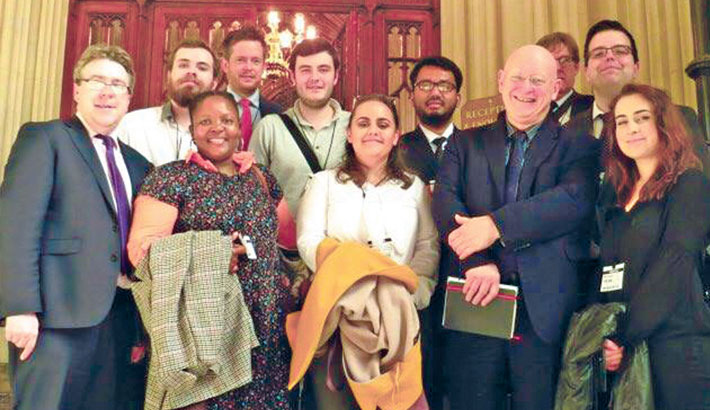 To understand UK Parliament and the role of a Welsh MP in London we met with Hywel Williams MP, Member of Parliament for Arfon, Shadow Spokesperson for Brexit, the Cabinet Office, and International Trade. He sits on Parliament’s Select Committee for Exiting the European Union. His political interests are in the areas of social affairs, social security, social work, language issues, devolution and international development. He also has interest in Turkey and Catalonia.

We also met with Baroness Randerson focusing on the role of the House of Lords in ‘Brexit Britain’. She is Former Deputy First Minister for Wales within the Welsh Assembly. We had an intensive discussion on BREXIT issues. We learnt more about the inner workings of the UK Houses of Parliament.

The UK public elects 650 Members of Parliament (MPs) to represent their interests and concerns in the House of Commons. MPs consider and propose new laws, and can scrutinize government policies by asking ministers questions about current issues either in the Commons Chamber or in Committees. The House of Commons is the lower house of the Parliament of the United Kingdom. Like the upper house, the House of Lords, it meets in the Palace of Westminster. Officially, the full name of the house is the Honourable the Commons of the United Kingdom of Great Britain and Northern Ireland in Parliament assembled.

Under the Parliament Act 1911, the Lords’ power to reject legislation was reduced to a delaying power. The Government is solely responsible to the House of Commons and the Prime Minister stays in office only as long as he or she retains the support of a majority of the Commons. The Commons Chamber looks very different to that of the Lords.

The current Chamber was rebuilt after the Blitz by the architect Sir Giles Gilbert Scott in relatively austere style (although it was less ornate than the Lords Chamber even before 1941). Its benches, as well as other furnishings, are green in colour, a custom which goes back 300 years. The adversarial layout - with benches facing each other - is in fact a relic of the original use of the first permanent Commons Chamber on the site, St Stephen’s Chapel.

The previous Commons Chamber on this site was designed by Charles Barry to be smaller and less elaborate than the Lords Chamber. When it opened in May 1852, the Members complained about its inadequate acoustics and insisted that the roof should be remodeled to rise from the sides towards the centre. Barry was forced to redesign the ceiling of the Chamber accordingly, and the roof of the present Chamber retains this general shape.

When the Chamber was rebuilt after 1945 at the cost of £2 million, Sir Giles Gilbert Scott designed a steel-framed building of five floors (two taken by the Chamber), with offices both above and below. He also introduced modern heating, light and ventilation and enlarged the galleries to provide many more seats, and especially for the press and public. But because of post-war budget constraints, he provided a simpler and plainer Gothic design for his Chamber.

The House of Lords is the second chamber of the UK Parliament. It is independent from, and complements the work of, the elected House of Commons. The Lords shares the task of making and shaping laws and checking and challenging the work of the government.

The Lords has three main roles: making laws, in-depth consideration of public policy and holding government to account. Members spend more than half their time in the House considering bills (draft laws). All bills have to be considered by both Houses of Parliament before they can become law. During several stages, members examine each bill, line-by-line, before it becomes an Act of Parliament (actual law). Many of these bills affect our everyday lives, covering areas such as welfare, health and education.

Members use their extensive individual experience to investigate public policy. Much of this work is done in select committees - small groups appointed to consider specific policy areas. In the 2016-17 session, House of Lords select committees produced 41 reports on subjects including the Brexit process with six Brexit reports in six days, the ‘Great Repeal Bill’ and delegated powers. Many select committee meetings involve questioning expert witnesses working in the field which is the subject of the inquiry. These meetings are open to the public.

Members scrutinize the work of the government during question time and debates in the chamber, where government ministers must respond. In the 2016-17 sessions, members held the government to account with 7,380 oral and written questions and 154 debates on topical issues and public policy ranging from the role of libraries and independent bookshops to the impact of Brexit on the NHS and social care.

The Lords Chamber is the most lavishly-decorated room in the Palace of Westminster. It has the grandest interior because it is where the three elements of Parliament (the Sovereign, the Lords and the Commons) come together. The furnishings in the Chamber are predominantly decorated in red, while green is the colour of the Commons’ end.

The Chamber’s ceiling is divided into eighteen paneled compartments, each showing ancient emblems such as the white hart of Richard II. The monarchs of England and Scotland were depicted in the original stained-glass windows by Pugin, but these were lost during the Second World War, and their 1950 replacements show the coats of arms of peers between 1360 and 1900.

The armorial bearings running beneath the side of the galleries are of the sovereigns from Edward III and the Lord Chancellors from 1377, and there are six allegorical frescoes representing the spirits of Justice, Religion and Chivalry, regarded by the Victorians as cornerstone virtues. Between the windows are statues of the sixteen barons and the two bishops known to have been present at the signing of the Magna Carta in 1215.

Many fittings and furnishings in the Chamber were designed by Pugin - including the solid brass gates at the entrance of the Chamber, each weighing some three quarters of a ton. At the far end of the Chamber on a dais is the Royal Throne. This ornate gilded piece is based on the early 14th-century Coronation Chair in Westminster Abbey. In front of the Throne is the Woolsack, on which the Lord Speaker sits. It is thought to have been introduced in the 14th century to reflect the economic importance of the wool trade to England. Over the years, its stuffing changed to hair, but in 1938 it was re-stuffed with wool from England, Wales, Scotland, Northern Ireland and countries of the Commonwealth, given by the International Wool Secretariat. The other two woolsacks are used by Judges at the State Opening of Parliament.

Finally we met with, and moot before, Lord David Lloyd Jones, first Welsh Supreme Court Judge, and his Judicial Assistant, Ewan McCaig. The Supreme Court, as well as being the final Court of appeal, plays an important role in the development of United Kingdom law. As an Appeal Court, the Supreme Court cannot consider a case unless a relevant order has been made in a lower Court. The Supreme Court is the final Court of appeal for all United Kingdom civil cases, and criminal cases from England, Wales and Northern Ireland: hears appeals on arguable points of law of general public importance, concentrates on cases of the greatest public and constitutional importance and maintains and develops the role of the highest Court in the United Kingdom as a leader in the common law world.

During the visit to Houses of UK Parliament I had an opportunity to meet personally Mr. Jeremy Corbyn, Leader of the Labour Party and Leader of the Opposition since 2015.

The writer is an Advocate, Supreme Court of Bangladesh and LLM Student in International Criminal Law and Human Rights Law, Bangor University, UK.