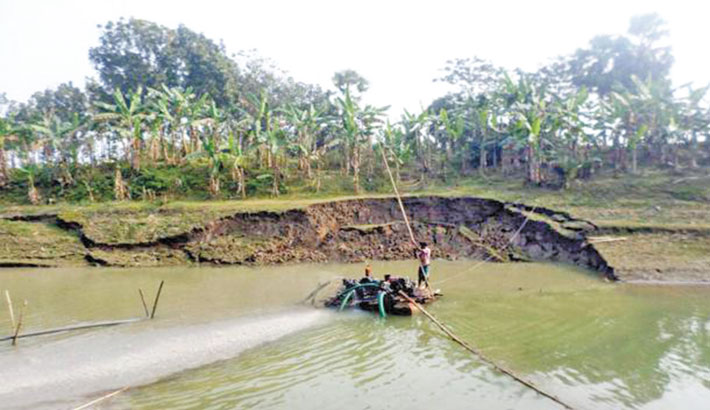 Rivers play an imperative role in the life of the mass people of riverine country Bangladesh. Ancient civilizations testimony that from the very inception of edification people used to live on the bank of rivers as river route was an easy way to communicate from one place to another. Unfortunately not all the nations understand the importance of maintaining rivers in a proper way. Thus sometimes rivers become a curse instead of turning into a blessing only due to faulty river management system. For example, the river ‘Huang He’ was known as ‘the sorrow of China’ because of the devastating floods that once it resulted in its lower course. However, nowadays the river is termed as ‘the blessing for China’ as the country has taken effective steps. Bangladesh experiences both good and bad impacts of rivers but with the course of time and advancement of technology the country couldn’t reap the benefits of its huge number of rivers rather it is failing to ensure appropriate environment of its rivers. This is the result of complete mismanagement and carelessness of the officials of the concerned government authority. Once natural river erosion was the most terrible reason of public suffering in the river adjacent areas of the country but now the erosion gears up with some man-made reasons as well. Illegal sand lifting from different rivers has become a major cause of river erosion. Albeit it is an old phenomenon, it has crossed all limits in the recent years. 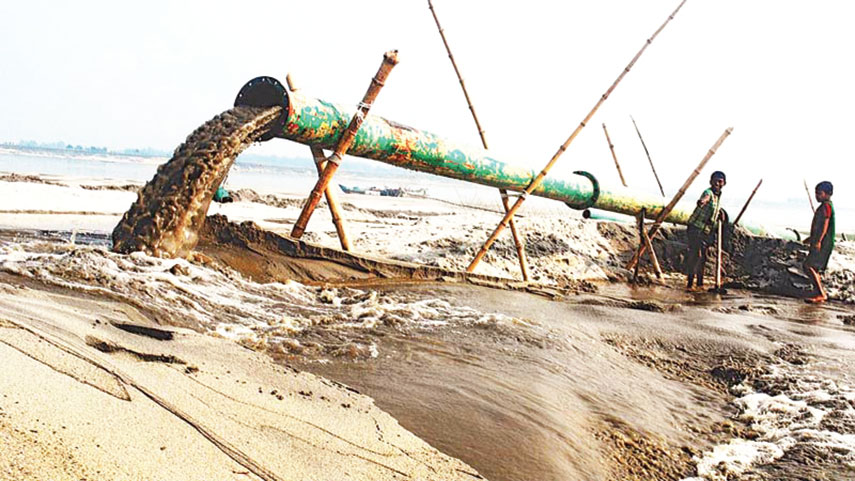 Most of the land of Bangladesh is alluvial lowland of three large rivers- Ganga (Padma), Jamuna (Brahmaputra) and Meghna. The land is covered with a mesh of large and small rivers and channels. The total length of 700 major rivers running in the country is about 22,155 km and almost all the rivers run without bank protection or embankment construction. And the monsoon rainfall occupies about 80 percent of the annual rainfall that is one third of the country. Therefore, erosion actively occurs along the outer banks during every rainy season. This time a huge quantity of sand and sediment - about 1.2 billion tons - is carried by the rivers every year. Sand deposits create shoals obstructing the movement of river vessels. This sand can be profitably extracted under a plan that is based on study of river flow dynamics. Proper use of sand after extraction from the quarry can contribute to economic growth and help in reducing poverty as it can create employment opportunity to some extent. Realizing the monetary benefit of sand mining, government enacted a law titled the Sand Quarry and Soil Management Act in 2010 in order to open the way for exporting sands. 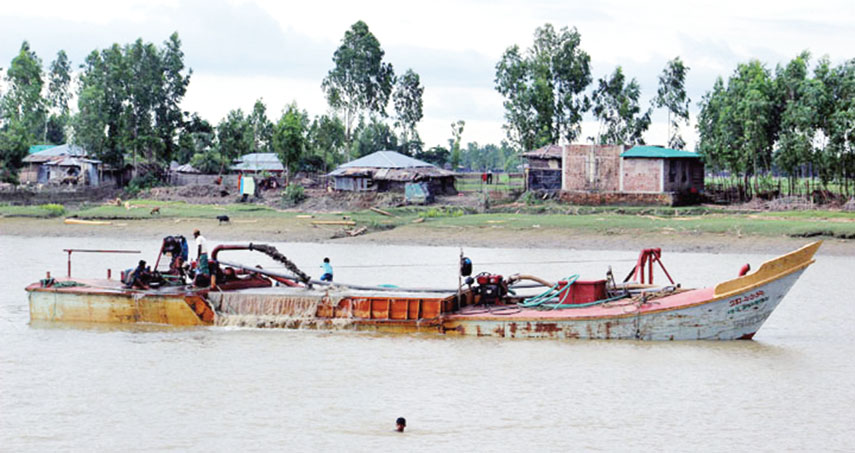 Overlooking this act some greedy traders, mostly local influential people and the leaders and activists of ruling party and its associate organizations, use their power and continue their illegal activities under the very nose of law enforcement agencies. But it is the common residents of the river bank areas who need to suffer for that. They often blame the in¬fluential persons for being engaged in mining and selling sand. According to the victims of sand lifting and river erosion, political leaders and activists are so clever that they recruit the in¬fluential local residents by giving them the authority to sell mined sand and extract sand from river. Thus they don’t need to face any challenge from the local dwellers. This unplanned and excessive sand mining causes terrible degradation of rivers. Mining lowers the bed below normal levels, which ultimately leads to bank erosion. Depletion of sand causes deepening of rivers and enlargement of river mouths. Hence, slight increase in the water level brings devastating erosion and often washes away houses and farm lands. Comparing the topographical maps of the past decades, the degree to which larger river channels changed in their forms and locations, an enormous number of villages disappeared. Sand mining affects the adjoining groundwater system of rivers and causes damages to infrastructure. Destruction of aquatic habitat is another dangerous adverse impact of this ill practice. Enlarged riverbed and bank erosion increases suspended solids in the water at the excavation sites and downstream.

On the other hand, most of the deputy commissioners (DCs) in the riverine districts are indiscriminately leasing out river beds for sand quarrying. This is one of the reasons for river erosion as the contractors extract sand from rivers without following any environmental plan only to secure their personal interests. For example, the local administration leased out 395 sand quarries alone in 2016-17 fiscal year across the country, from where the government earned a total of Tk. 659,314,369. While leasing the riverbeds DCs are considering only its economic benefits without thinking about its ultimate impact. Consequently sand traders are digging up sand without caring for maintaining the proper alignment of riverbeds as there is an allegation that the leasing of sand quarries are being given under political consideration. Experts and environmentalists have observed that if this trend persists, it would make the country’s rivers unstable as the river banks are becoming vulnerable and large chunks of land, including embankments, bridges and homesteads are being eroded. As a result Bangladesh Water Development Board (BWDB) had an expenditure of Tk. 1,500 crore during 2016-17 fiscal year to prevent river erosion caused mainly by frequent lifting of sand from riverbeds. Meanwhile, many development projects, including dredging of rivers, have been ordered to be halted because of such leases. For example, the Bangladesh Inland Water Transport Authority (BIWTA) has taken up a dredging project on the Manu river to increase its navigability, but the authorities concerned have failed to commence the work to clear the sand bars since November 9, 2017, as the riverbeds adjacent to Manu river have been leased out for sand quarrying. 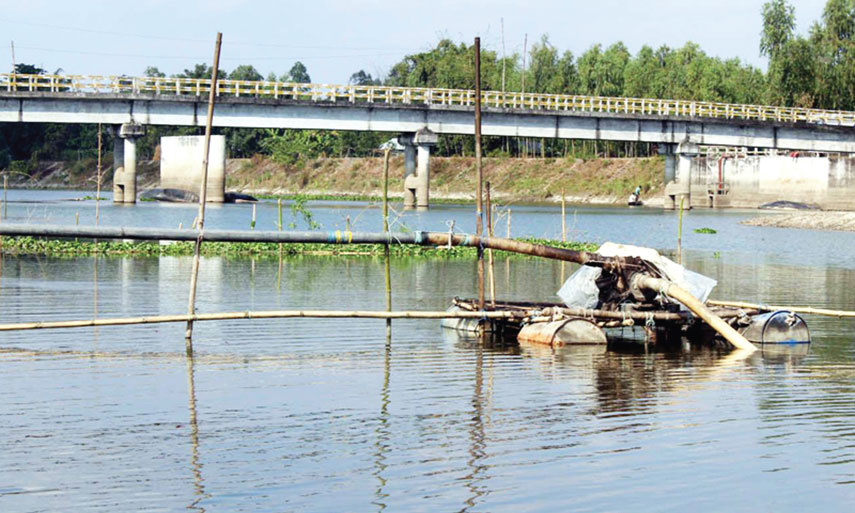 While the Sand Quarry and Soil Management Act was enacted it kept the provision of not allowing sand quarrying within one kilometer of any bridge, culvert, dam, barrage, embankment, highways, rail tracks, residential areas and other important structures. But in reality influential persons are lifting sand in a free style. Sand lifting without taking permission from the concerned authority is also prohibited by this law as according to it illegal sand mining is a criminal offence. But the law terms this offence as bailable and compoundable! Anyone will be astonished by hearing that if someone grabs national asset illegally, confirms economic loss of the country and brings huge havoc to environment and human life, he can be freed by making a compromise! Even if he is arrested for his illegal activity, he can roam around freely by securing bail as he will enjoy this right during the trial! If the wrongdoing is proved, the offender shall be punished with fine ranging from fifty thousand to ten lacs taka or with imprisonment of maximum two years or with both. The same offence can be tried by the mobile court under the law of 2010. Newspaper reports show that illegal sand lifting begins on the next day of conducting a drive by the mobile court.

In short, sand lifting is one of the easiest ways to earn illegitimate money as the illegal sand traders do not need to spend a considerable amount of money to collect sand. What they require is only to employ a few labourers. Thus they continue their unlawful activity making an unholy nexus with the local influential political leaders and administration. Well, it is very tough to control the current trend of irrational sand lifting by the existing law. Government will have to amend the law by inserting provisions for higher punishment, lifting bailable and compoundable provision and making the law stricter. And the administration needs to implement the present law efficiently until the parliament formulates new law. Moreover Deputy Commissioners should not be allowed to lease the riverbeds since it is a highly technical issue.