Swimmer Ariful reigns over the pool 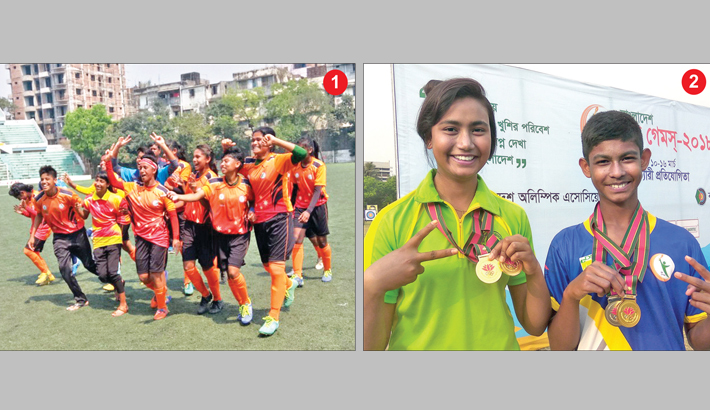 Bangladesh Youth Games went on full throttle with youngsters from every part of the nation proving their potential in this highly competitive and first of a kind sports tournament at multiple venues simultaneously on Monday.

BYG already presented the nation with a potential future superstar in the form of young swimmer Ariful Islam. Ariful snatched record five gold medals in the boy’s events while Khadija Akhtar earned two gold and one silver medal in the girl’s swimming event’s final round at Syed Nazrul Islam National Swimming complex at Mirpur on Monday.

Ariful was unstoppable in the pool claiming the top spot in all the events he participated in. Al Amin and Mithu Mia also grabbed a gold medal each. 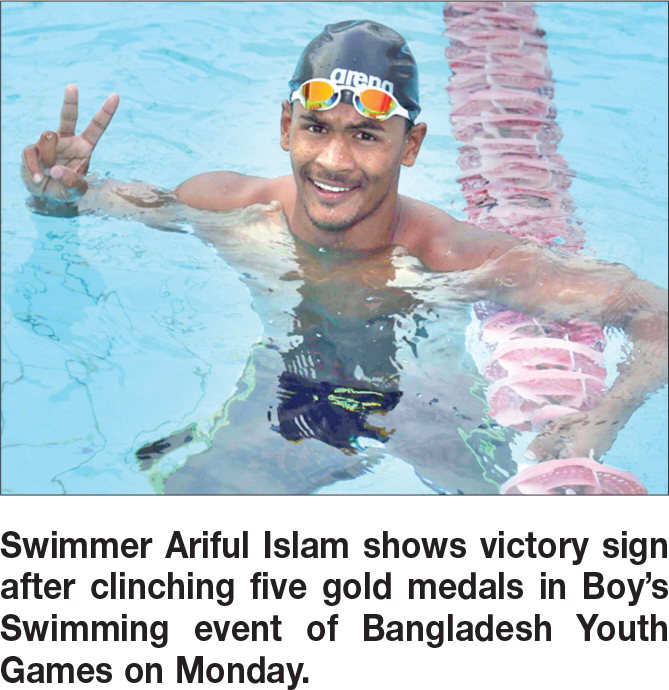 Both the athletes are also gold medalists of the National Junior Championships as well.

Over at Maulana Bhashani National Hockey Stadium, Khulna and Dhaka advanced to semi-finals and tasted victories in their last game of the group stage of Girl’s Hockey. Khulna triumphed over Rangpur by 3-0 in the shoot-out stage while Dhaka won against Rajshahi by 2-0 goals.

It was goal fest in the Girl’s Football event as Dhaka obliterated Khulna Division by 16-0 goals at Bir Sherestha Shaheed Sepoy Mostafa Kamal Stadium in the capital. Young gun Shahida scored a staggering 8 goals for Dhaka.

In the meantime, Marufa, Rony, Salma netted the ball to propel Mymensingh to a 3-2 victory over Chittagong and advance to the finals.

Meanwhile, BYG saw the final round of Kabaddi event rolling into the ground at Kabaddi Stadium in the capital.

The final round was inaugurated by the newly selected Bangladesh Kabaddi Federation President and Inspector General of Police (IGP) Dr Javed Patwari in the morning.  A total of four matches were held on the day, In Boy’s Kabaddi Rajshahi defeated Mymensingh by 43-16 points while Chittagong triumphed over Barisal Division by 48-28 points.

The Girl’s Kabaddi featured Mymensingh outclassing Sylhet by 53-9 points as Chittagong went over Barisal by 48-28 points.

Seven more matches— four of boys’ and three of girls’ of volleyball events of the inaugural Bangladesh Youth Games were decided on Monday at Volleyball Stadium in the city.

In the day’s Boys’ Volleyball matches, Barisal beat Sylhet by 3-0 sets, Khulna defeated Rangpur by 3-2 sets, Barisal outclassed Mymensingh by 3-0 sets while the match between Chittagong and Rangpur were on when the last report came this evening.

In the Girls’ Volleyball matches, Sylhet beat Mymensingh while Khulna overpowered Sylhet both by 3-0 sets.

Rajshahi Division emerged on top in the Archery event on the final phase of BYG at Ahasan Ullah Master Stadium in Gazipur.

Khulna Division were placed at bottom at the table securing four bronze medals.