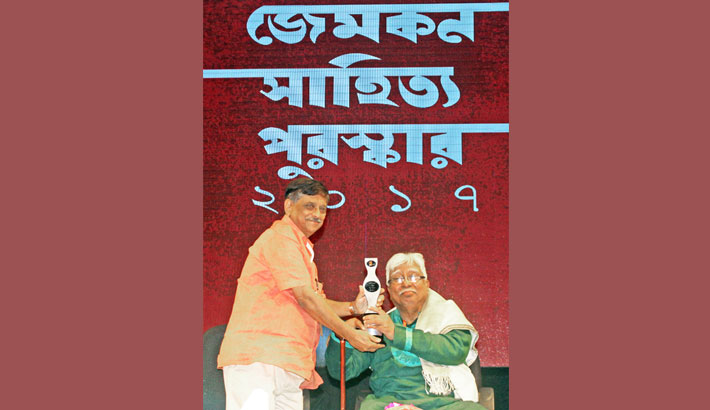 On the opening day of Dhaka Lit Fest 2017, Poet Mohammad Rafique was awarded ‘The Gemcon Sahitya Puroshkar’ (a literary award) for his outstanding book titled “Duti Kabbyagrantha”. Ashraf Jewel and Mamun Ur Rashid were also announced as the winners of the ‘Tarun Literary Award’ while Nusrat Nusin won the ‘Tarun Poetry Award’ of this year. In the evening, an open discussion titled `The Bengali Muslim’ by Salimullah Khan, Samia Huq, Syed Saifuddin Ahmed Maizbhandari and Sumon Rahman was held at Bangla Academy. In the discussion, they lighted upon the fact that most Bengali Muslims are in fact converts. People had converted to Islam, influenced by the approach of Muslim preachers who came to this subcontinent with foreign invaders. However, the Muslims of this region have experienced the strictly conservative brand of Wahhabi Islam foisted upon them. On the other hand, people have also seen a shift to the more moderate, Persian Sufi School. Hence, Bengali Muslims remain confused about what originated in this soil and what came and set its roots here. After the panel discussion, the audience asked some question about the topic to the panelists.

On the same day, at Poet Shamsur Rahman Seminar Room, literary and cultural historian Ananya Kabir and academic and theatre practitioner Syed Jamil Ahmed held a discussion on `Intangibles’. Oral, dance and theatrical forms, they said, hold a wealth of stories of people who have been custodians of this vast knowledge and art. They added that these intangible forms, passed from the generation to generation, hold the joys and sorrows of communities.

On the closing day, Anuk Arudpragasam was announced as the winner of the prestigious ‘DSC Prize for South Asian Literature 2017’ for his noteworthy novel The Story of a Brief Marriage. Finance minister Abul Maal Abdul Muhith handed over the trophy to the winner on the prize giving ceremony arranged at Abdul Karim Sahitya Bisharad Auditorium at Bangla Academy.

It is mentionable that the committee has been arranging Dhaka Literary Festival every year since 2012, marking a resurgence of Bangladeshi literary culture and familiarizing our people with other cultures far beyond our border. The festival promotes the works of Bangladeshi writers, translators, thinkers, philosophers, scientists and artists.