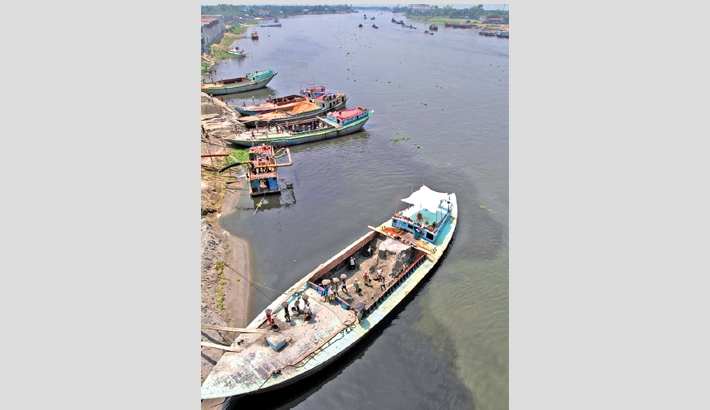 Water purification for Dhaka city dwellers has become an uphill task, especially in the lean period, because of pollution in the river Shitalakkhya and DND canal.

More than 15 lakh cubic metres untreated sewage is being discharged into adjacent rivers of Dhaka city every day as the densely populated city does not have enough sanitation system, the watchdog said.

Nearly 80 percent of that sewage comes from industrial waste and the rest from the citizens of the capital city.

Besides Shitalakkhya, the river pollution situation is getting worse day by day in other surrounding rivers like Buriganga, Turag and Balu rivers.

In these circumstances, establishing an inter-ministerial coordination as well as initiatives to stop the river pollution has become imperative for the sake of keeping two water treatment plants in Sayedabad functional and ensuring continuous supply of safe water to Dhaka city, the IMED said.

Although the treated water at Sayedabad plant is pure, it is getting polluted at different stages of end users for various reasons, said the impact assessment report that has been prepared after conducting a survey among city dwellers.

Other reasons of the water pollution also include supply line faults due to unplanned road digging for lack of coordination among service providers and use of substandard fittings in link lines and residential connections, which the report said are spreading waterborne diseases.

During the survey, people alleged that waterborne diseases, particularly diarrhoea, were still high among city dwellers although the trend is somewhat on the decline.

The frequency of diarrhoea, dysentery and skin diseases was found very high among low-income communities, especially infants aged five years or below.

For the diseases, each family has to bear Tk 500 as treatment cost on average. Even the treatment cost was found much higher among some families.Most of the survey respondents said the quality of piped water varies from season to season while stinky and non-transparent water is a common phenomenon, particularly in the dry season.

IMED officials has recommended enhancing WASA’s oversight, repairing and improving defective supply lines and snapping illegal connections for improving the quality of piped water that is being contaminated at transmission level.

The report also called for an inter-ministerial initiative to check pollution of water of the Buriganga and Shitalakkhya rivers and canals surrounding Dhaka city to help supply of more treated water to the city.

The IMED recommendations also include freeing illegally grabbed riverbanks of the Shitalakkhya alongside preventing entry of industrial waste and sewage lines into the river.