80 lakh affected by floods in 32 dists 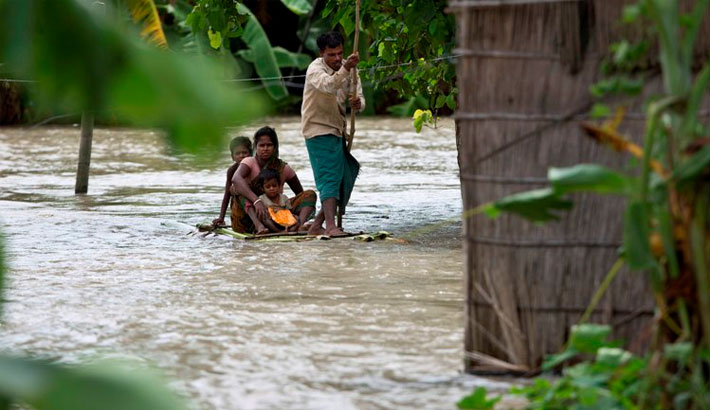 Over 79.58 lakh people have been affected by floods in 32 districts of the country, official sources said.  Although floodwaters have receded from the affected districts, signs of devastation still remain all over the areas.  The flood victims are passing days in extreme miseries as the disaster has washed away their houses, croplands, domestic animals and other valuables.  The flooding has taken lives of 145 people across the country, completely damaging 103,516 houses. It also partially damaged 618,516 houses and completely destroyed 85 educational and religious institutions, according to the Department of Disaster Management (DDM). Road communications in the affected areas have been snapped due to complete damage of 885 kilometre roads, partial damage of 10,366 kilometre roads and complete damage of 884 culverts.

Crops on 1, 02,808 hectares of land have been totally damaged while crops on 5,04,147 hectares have been damaged partially. About 84,770 chickens and ducks have perished due to floods, DDM sources said.

Meanwhile, the government has geared up relief operations in the flood-affected areas. DDM Director-General Md Reaz Ahmed told the daily sun that they were providing relief for the flood victims through district administration.

“The government has allocated over Tk 105.97 crore for relief operations to help meet emergency needs of people in the badly affected districts,” he said.

“The government would allocate more money as per requirements of district administrations,” he said.  Besides conducting massive relief operations and humanitarian support, the Ministry of Disaster Management and Relief with support from different ministries, has taken steps to rehabilitate the flood-affected people.

“Construction work of roads and culverts in rural areas will start this month and it is likely to be completed within 1.5 months,” he assured.

“The Local Government Engineering Department (LGED) and the Roads and Highways Division (RHD) will also repair damaged roads and culverts under their jurisdiction,” he said.

A total of 1,461 medical teams have been working in the flood-hit districts to provide emergency healthcare service and protect people from the water-borne diseases.

Disaster ministry officials said that the government had already taken initiatives to rebuild houses and other infrastructures damaged by floods.