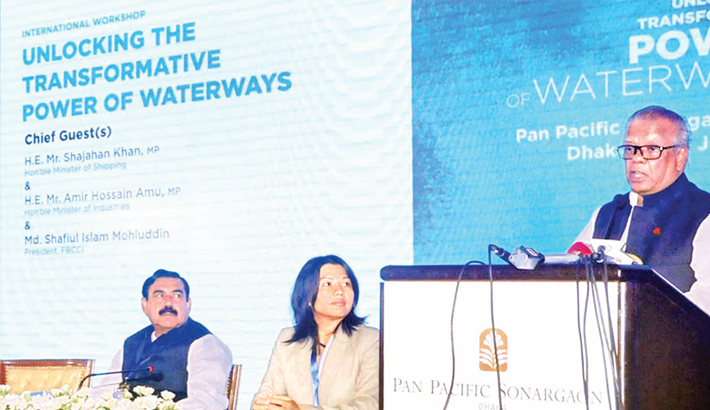 Industries Minister Amir Hossain Amu speaks at the inaugural session of a day-long international workshop titled ‘The Transformative Power of the Waterways Sector’ at a hotel in the capital on Tuesday.

Industries Minister Amir Hossain Amu on Tuesday called for improving inland waterways in Bangladesh to help boost the economy of the South Asian region through easy movement of people and goods.

"The inland waterway transport has the potentials to support regional cooperation and integration by creating a common transportation route across several regional countries that share the same river," he said, reports BSS.

The industries minister was addressing as the chief guest the inaugural session of a daylong international workshop titled "The Transformative Power of the Waterways Sector" at Sonargaon Hotel in the city, said a press release.  Amu said inland waterway transport is generally acknowledged as a clean, safe and most energy efficient mode of transport compared to land based systems.

The World Bank has taken a project on Regional Waterway Transport in Bangladesh, which incorporates the initial transformation of the waterway transport system in Bangladesh and India and the sub-region, he mentioned.

Amu said Inland Water Transport (IWT) in Bangladesh is the life line of transport system, while Dhaka-Chittagong corridor and adjoining routes are the artery of IWT network.

The minister said the World Bank's project is setting a program of national and regional connectivity through inland waterways, with positive economic and environmental externalities beyond the borders of Bangladesh.


The same kind of investments are underway in India aimed at facilitating passenger and cargo movements between Bangladesh and India, and eventually with Bhutan and Nepal, he added.

The government has identified 65 main river navigation routes that are essential to passenger and freight transport within Bangladesh, he said. "Of these, 12 have been clearly identified as high priority," he added.

A study to prioritize the remaining 53 routes is underway under the World Bank-supported Bangladesh Trade and Transport Studies Recipient-Executed Trust-Funded (RETF) project, the minister said.