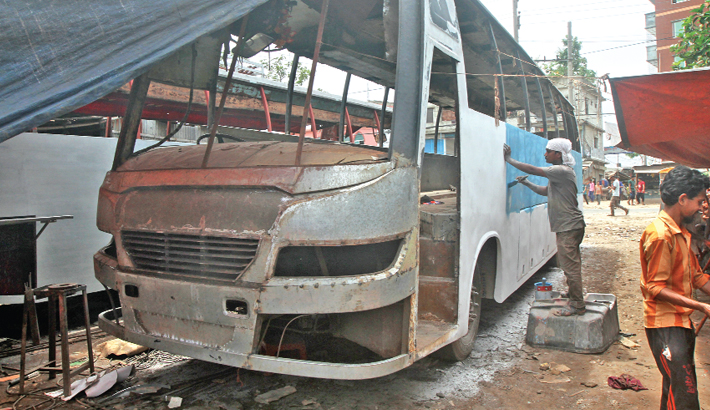 An unfit bus is being given a facelift to operate it during a mad rush of Eid holidaymakers. The photo was taken from Demra area in the capital on Tuesday.-Kamrul Islam Ratan

A large number of unfit buses are being refurbished at workshops in the capital to operate them for making money during a mad rush of Eid holidaymakers.

Transport owners are now busy giving facelift to their faulty vehicles. Most of the vehicles do not have fitness certificates and road permits.

Unfit or unregistered vehicles are operated in the capital and elsewhere in the country during Eid every year, putting passengers’ life in danger.

The authorities concerned do not take any action to stop operation of the worn-out vehicles overloaded with home-goers, it alleged.

Such overhaul of worn-out vehicles may multiply the risks of road casualties, but who cares? These partially damaged vehicles take on extra passengers with the same shady intent to rival other competitors.

Against this backdrop, experts said passenger safety issue is being ignored as always, as if owners are mightier than regulators.

Like previous years, many believe, ramshackle vehicles crammed full of passengers may create huge tailbacks on highways this time too.


Sources said a bus is allowed to run for 15 years, but owners don’t follow the order. When a long-haul bus is past its age, it’s used in town service and it’s further refurbished for Eid trips.

During visit to some workshops in the city, it was learnt that vehicle repairs go on at workshops in Gabtoli, Aminbazar, Hemayetpur, Savar, Jatrabari, Matuail, Kajla, Demra, Jurain, Tongi, and Gazipur areas where the repairers are working round the clock to complete works and deliver the vehicles to owners before the Eid rush.

Iqbal Hossain of Anwara Engineers and Workshop in Demra said, “Many faulty buses are coming here and we are just redecorating them to attract Eid vacationers.”

Nazir, a worker of Mitali Engineering Workshop in Kajla said “We are repairing several buses whose colours have faded, windows have broken and bodies have dented. We will give the buses a facelift and these will ply ahead of Eid”.Some buses, which were involved in crashes, also get “repaired” ahead of Eids so that they could run during the mad rush.

A staffer at a workshop named ‘SS Engineering’ in Aminbazar said “We have to work night and day before every Eid as bus owners put pressure on us to get the works done as soon as possible”.

Abdul Haque, another mechanic at a workshop in Gabtoli said “We have to work day and night before every Eid as the bus owners put pressure on us to get the works finished as soon as possible”.

Banking on transport scarcity, the shady owners are carrying passengers by unfit buses during Eid.

Most are operating in northern districts. Such vehicles from Dhaka also carry passengers to nearest districts like Faridpur, Comilla, Chandpur, Brahmanbaria, Manikganj and Tangail, sources said.

A bus must obtain a route permit from Bangladesh Road Transport Authority (BRTA). But during the Eid rush, some dishonest owners operate unfit buses without route permits.

As there is a huge rush of vehicles on highways, law enforcers are too busy trying to ease congestion and get little to no chance to stop the operation of unfit vehicles. Unscrupulous bus owners take this advantage.

Bangladesh Passengers Welfare Association (BPWA) said a total of 13 lakhs public transports are running without fitness. Of them, 30 per cent registered public vehicles are unfit.

“Strong monitoring should be there to stop operation of over three lakh registered but faulty vehicles and 10 lakh unregistered unfit vehicles across the country during Eid,” he said

Making a plea to the government to control operation of damaged vehicles, he also said, “Hundreds of passengers are losing lives and many becoming injured in road crashes during Eid journey only because of movement of faulty vehicles.”

However, Khandaker Enayetullah, president of Bangladesh Sarak Paribahan Malik Samity, said “All the allegations are not true, as bus owners are repairing vehicles before Eid festival for giving a new look”.

“RMG workers head homeward on rented city buses during Eid rush. Such buses sometimes break down for engine failure and cause congestion on highways.”

“We were alerted owners during meeting about the unfit buses and action will be taken by mobile court, if the buses will come on the roads despite the alert, said BRTA secretary Mohammad Shawkat Ali.