A motorised three-wheeled van is running on a filthy road and all the waste, including dust, rags, plastics and polythene, scattered on the road vanishes within a moment.

A roller brush of the improvised vehicle made using local technology sucks waste and gathers those in a chamber inside automatically when it moves on roads. The whole process of cleaning waste looks like a magic.

Md Jiaur Rahman, a graduate of physics from Govt Titumir in Dhaka, has invented this smart road cleaning machine, which could provide a sustainable and innovative solution to the waste problem.

“I was disturbed watching huge roadside waste. I had observed that the cleaning system of our city corporations was mainly dependent on manual efforts. They may not have enough cleaners,” he said.

“While beginning to work with the project in 2016, I kept certain things in mind. I found that city corporations import some expensive road-cleaning machines which are not only ineffective but also difficult to repair. I had a dream to innovate low-cost but effective cleaning equipment,” he added.

But the progress was not smooth. He had to take six-month training on light engineering from Light Engineering Training Institute (BLETI) which helped him to a great extent.

Finally, his hard work paid off as he succeeded in inventing his dream machine at the beginning of 2021.

“It’s a low-cost solution product which can be purchased at Tk 2-5 lakh, much lower than our existing road-sweeping machines. My machine can clean waste of 5 kms of road per hour without flying the dust. It has the capacity to collect 30 kg waste in its chamber which can be increased to 70 kg or more,” said Jiaur.

“The interesting thing is that waste like old tyres and tubes are used as brushes of the machine. We can use huge polythene in the interior of the machine. The other parts are a DC battery motor, diesel and gas engine, and a steel chamber,” he said, adding that the repairing facilities of the machine are available in the country.

Meanwhile, the innovation was appreciated by the experts from home and abroad. Jiaur has already been granted a fund of Tk 10 lakh by the Innovation Design and Entrepreneurship Academy (iDEA) Project under the Information and Communication Technology Division of the government.

DNCC Superintendent Engineer (Mechanical) Abul Hasnat Md Ashraful Alam said, “As a student he did very well. But for the commercial production of the cleaning machine, it needs some professional inputs.”

Talking to the Daily Sun, DSCC Executive Engineer of Waste Management Department Sufi Ullah Siddik Bhuyan appreciated the innovation. “We have the interest to introduce this kind of vehicle-type cleaning machine because it’s widely used in smart cities. We asked for modifying and strengthening the capacity of the machine so that it can clean both roads and surface drain through separate suction chambers,” he said.

He added that DSCC would provide technician support if required.

Jiaur, hailing from a poor family in Bhaluka upazila of Mymensingh district, said he wanted to continue his research for making the machine more handy and efficient. But despite developing a wonderful project, the young man has been going through financial hardship to move further.

“If I get investment and technical support, I can modify the vehicle and add more values, including strengthening the vacuum pressure,” he said.

While speaking about his future plan, the youth said, “I have a plan to develop five types of cleaning machines for collecting waste from houses and streets. In the near future, I’ll bring a box-less four-wheeler and add a large container for reserving the waste.” 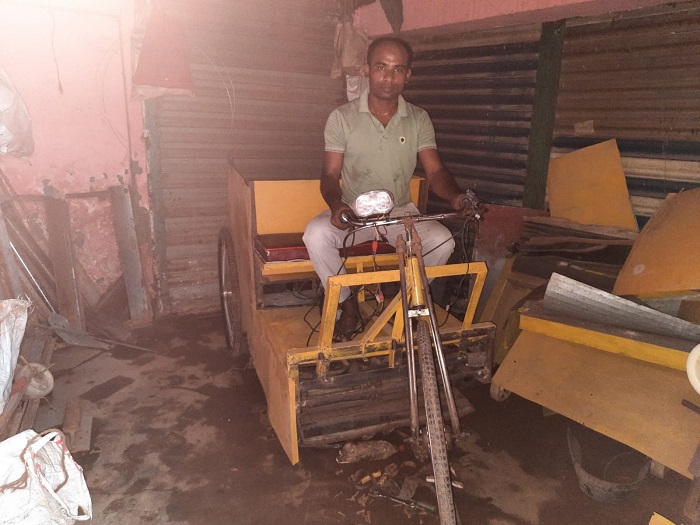