Bangladesh suffered their first defeat in their ongoing tour of Zimbabwe when they lost to the hosts by 23 runs in the second of the three-match T20I series in Harare on Friday.

Bangladesh failed to exhibit any good performance in any of the three departments which caused them to concede their first defeat to the African nation in T20 format after five matches and thus they missed the chance of completing the series win with one match to spare.

However, the Tigers have still the chance to clinch their first-ever T20I series win in Zimbabwean soil when they take on the hosts in the series-deciding third game on Sunday at the same venue.

Debutant Shamim Hossain only showcased a fight after Bangladesh were left struggling at 68-6 in the 12th over while chasing 167 runs but his little cameo of 29 off 13 balls wasn’t enough for the Tigers as they got bundled out for 143 runs in 19.5 overs.

Earlier Bangladeshi bowlers were punished by opener Wesley Madhevere, who struck the highest 73 off 57 balls while Ryan Burl scored an unbeaten 34 off 19 balls at the end as they made 166-6 in 20 overs after electing to bat first.

Bangladesh made a poor start in the run chase as they lost both their openers – Mohammad Naim and Soumya Sarkar to pacer Blessing Muzarabani in the third over of their innings.

Experienced Shakib Al Hasan and Mahmudullah were unable to rebuild the innings as they departed in quick succession while Mahedi Hasan, who was promoted at number three, was dismissed on 15 off Wellington Masakadza.

Afif Hossain and Mohammad Saifuddin made 24 and 19 runs respectively apart from Shamim’s cameo but it was hardly enough for the Tigers to stage another dramatic comeback like the second ODI of the previous series.

Masakadza and Luke Jongwe claimed three wickets each while Muzarabani and Tendai Chatara took two wickets respectively for the hosts.

Zimbabwe, who earlier lost two wickets within the power-play, got back on track after Madhevere and Dion Myers (26) put up a 57-run stand for the third wicket.

Zimbabwe batters scored 54 runs off the last five overs to post their second-highest total in a T20 international at Harare Sports Club which was enough for their bowlers at the end. 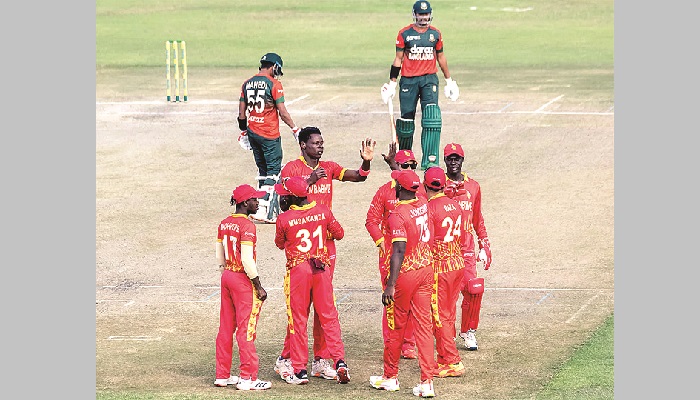