Huge fire breaks out at chemical factory in West Bangal 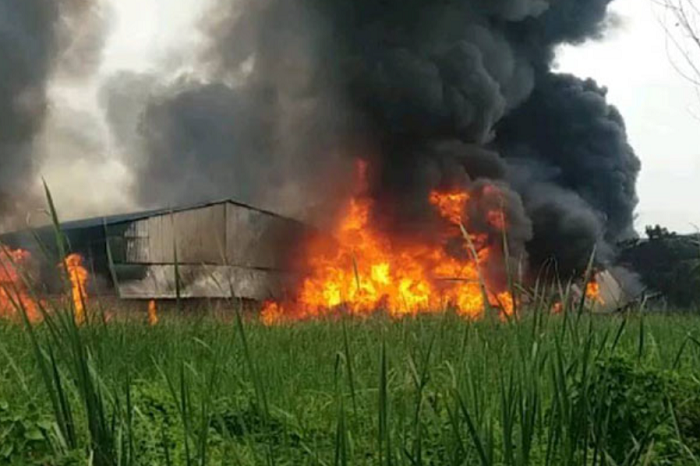 A terrible fire broke out on Tuesday at a chemicalfactory located in Bengal’s Maheshtala town in South 24 Parganas. The fire spread quickly as there was a huge collection of combustible material in the factory. Twelve fire engines have already reached the accident spot. According to reports, the ignition of a small flame led to the explosion of drums, loaded with chemicals, one after the other, setting the whole factory ablaze. The inferno was so big that firefighters were reportedly unable to enter the factory.

In what is a classic example of the domino effect, fire also broke out in a coconut oil factory which was located just next to the sanitizer plant. The situation was so grave that firefighters were forced to use robotic pumping machines to reach the source of the fire. As news of the mishap spread, Fire Minister Sujit Basu also reached the spot.

According to reports, the first explosion took place at around 11 in the morning. After landing the pumping machines near the source of the fire, the fire brigade officials fought the flames for hours before they could finally be doused. After the flames in the sanitizer factory were brought under control, the fire brigade attended to the fire blazing on at the coconut oil factory

Luckily, no one fell victim to the inferno, save one worker who suffered minor injuries. The fire department will now check whether the factory had a proper firefighting system in place and adhered to the guidelines for factories.