Terrible ordeal on way to homes 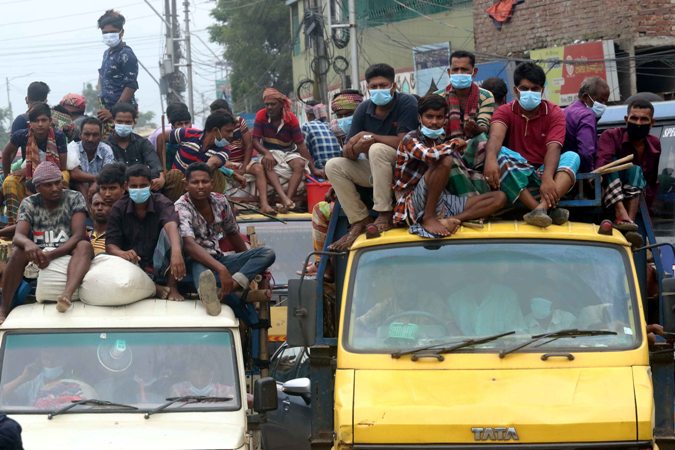 People made a last-minute rush on Monday to return to their village homes to celebrate the religious festival with the near and dear ones.

Eid holidaymakers suffered a lot during their home journey as long tailbacks were created on different highways.

Despite their sufferings and uncertainty of their return to the capital, people were found making a mad rush to village homes.

Since the resumption of long-distance bus services on Thursday, highways have been witnessing gridlock. A large number of city-dwellers left for their village homes on Monday.

While visiting Sayedabad, Mohakhali and Gabtoli bus terminals, Kamalapur Railway Station and Sadarghat Launch Terminal, this correspondent has found that passengers from different directions of the capital were pouring into the stations to get vehicles.

People were not maintaining any social distancing and other health guidelines on the fight against Covid-19 at the places.

In Gabtoli, most home-bound people did not follow health guidelines. There is no physical distancing in the crowds of passengers.

One of the two seats is kept vacant in long-distance buses to maintain health guidelines. But the guidelines are not being followed in trucks, pickups, private cars and microbuses.

Home-bound people were leaving the capital for their destinations in these vehicles without maintaining any social distancing and other health safety rules.

Apart from Gabtoli, people have been seen waiting for long-route buses at most of the terminals, including Mohakhali and Sayedabad, in the capital.

Hundreds of vehicles and commuters got stuck for hours in a 17-kilometre tailback on Dhaka-Tangail-Bangabandhu Bridge route on Monday.

Starting from Bangabandhu Bridge’s eastern end, the tailback reached Pabna bypass on the highway near the Tangail town. Drivers and passengers, especially women and children, are suffering due to traffic gridlock.

The Dhaka-bound lane of the highway was clear, but hundreds of vehicles were stranded on the opposite lane.

Passengers’ pressure was seen at Shimulia ghat in Munshiganj as they were crossing the Padma river by launch without following the hygiene rules.

Imrul Islam, an employee of a textile mill in Narsingdi, said he is going to his village home in Boalmari of Faridpur after Eid holidays started.

“Although the condition of the road was good, I saw heavy passenger pressure when I came to the ghat. Hygiene has disappeared under the pressure of passengers,” he added.

Members of the scouts were seen scattered throughout the station. If there is no mask on someone’s face, they were requesting to wear a mask. Festoons with various slogans related to hygiene were also seen in their hands. Hand sanitizer is kept at the entrance of the passengers.

The station authorities said there was no rush to the station due to online ticketing and passengers were not being allowed to enter the station without tickets.

Kamalapur Railway Station Manager Md Masud Sarwar said: “We’ve taken steps to provide safe rail travel ahead of Eid. The ministry has instructions to follow the hygiene rules. We have been able to make people obey the rules of hygiene.”

The station manager said there had been no train schedule disruption. The train is coming to the station on time, leaving the station. Eid passenger transport has started since last Thursday. Passenger pressure will increase further up front.

There was a huge crowd of passengers at Sadarghat launch terminal on Monday. Hygiene was neglected. Thousands of people are leaving the capital and going home without paying attention to health rules to celebrate the Eid with their families.

The launch authorities were not seen spraying hand sanitizer at the entrance. Also, there is no initiative for wearing a mask and keeping social distance. They were just busy taking passengers. In addition, the launches have been seen to take extra fare and extra passengers.

However, Bangladesh Inland Water Transport Authority (BIWTA) and launch owners do not agree to this issue. They said launches are being operated in accordance with the hygiene rules.

Saidur Rahman Rintu, vice-president of Bangladesh Launch Owners Association, said, “We are running launches with half seats vacant in strict compliance with hygiene rules. All launch owners have been told to comply with hygiene rules.”

“No extra fares and passengers are being taken anywhere. This time we are in a strict position with hygiene. However, it is very difficult to observe 100 percent hygiene on the boat,” he added.

BIWTA officials said it is very difficult to follow hygiene rules if passengers are not aware. They were giving utmost importance of wearing masks. Besides, they have not received any allegation of extra fares.

Considering the worsening situation of Covid-19, the government has taken a decision to impose a 14-day restriction across the country from July 23.

All types of public transport will remain closed from 6am on July 23 to 12 midnight on August 5, according to the cabinet division circular.