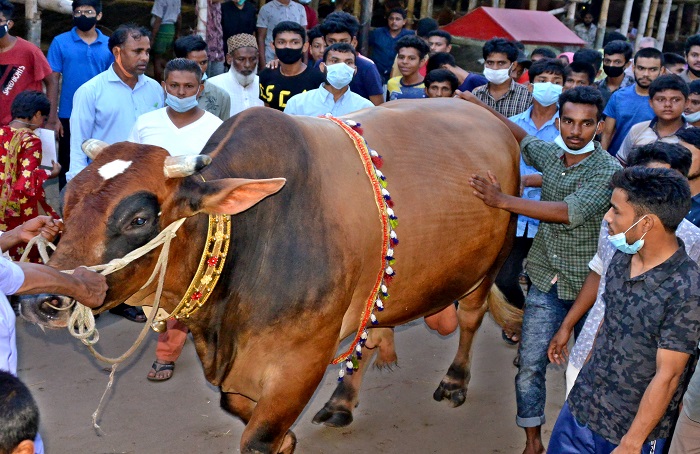 Cattle markets in the capital were buzzing with buyers and traders on Saturday, two days ahead of holy Eid-ul-Azha.

Large numbers of cows, goats, sheep, camels, bullocks, buffaloes and other sacrificial animals are now on display for sales, this correspondent found during his visit to some cattle markets.

Traders were not happy with the low prices of animals which buyers are offering like previous years.

Cattle trades at Gabtoli market started in full swing on Friday and traders expect that sales will peak in the next few days.

A large number of cattle have been brought to Dhaka ahead of the religious festival and many more are on the way.

Many buyers said cattle prices are higher this year while traders claimed that they have purchased local cattle this year at higher prices.

Big locally-raised cows, camels and dumba have been drawing huge attention at the cattle markets as crowds were seen surrounding big cows in the markets.

The managements of the both city corporation directed the traders to start sales of animals from four days before the Eid festival and continue until the Eid day at the makeshift cattle markets.

Most of the cattle brought to Gabtali and other cattle markets are home-reared. Traders from different parts of the country, including Dhaka, Chattogram, Sylhet, Barisal, Kushtia, Bogura, Pabna, Sirajganj, Rajshahi, Rangpur, Naogaon, Manikganj, Savar, Gazipur, Ishwardi, Mymensingh and Khulna, are still heading to the capital with trucks full of sacrificial animals.

Cattle trader Saiful Islam, who came to Gabtoli from Kushtia with two large cattle, said, “These cross foreign breed cattle are two years old. I am asking 2.75 lakh one big and 2.5 lakh for another one.”

He bought the bull on Friday at the market, but yet to get the desire price as buyers are only looking for medium and small cattle this year.

Many buyers were also seen visiting the makeshift cattle markets and checking cattle prices before making a decision to buy one.

Huge numbers of buyers gathered at the markets on Friday and Saturday while traders sold hundreds of cattle.

Sales of cattle are increasing with the Eid day drawing nearer, traders said.

Traders and buyers said a demand for small-and medium-size cattle is higher at cattle markets.

He was asking Tk 35,000 for each of the two big goats. He, however, said buyers are looking for goats at lower prices, but the cost of goats is high this year.