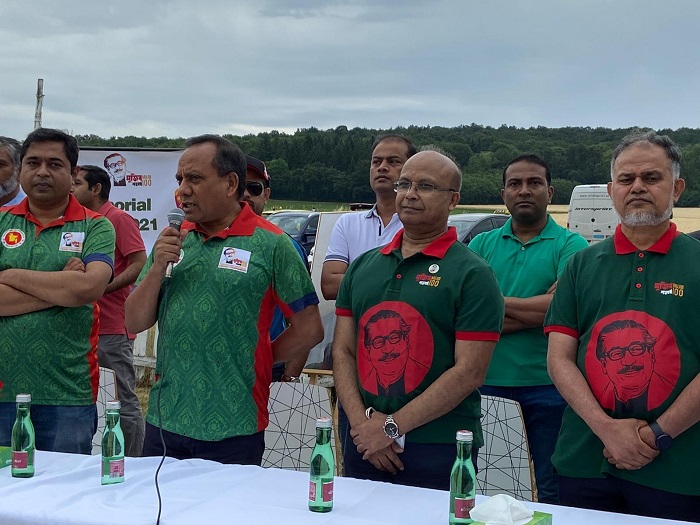 The Bangladesh Embassy and Permanent Mission in Vienna organized the 2nd Bangabandhu Memorial Cricket Tournament to commemorate the Birth Centenary of Father of the Nation Bangabandhu Sheikh Mujibur Rahman and Golden Jubilee of Independence.

The tournament held on July 11-12 amidst much enthusiasm and interest among the members of the Bangladesh community in Austria, particularly the youth.

The 1st version of the Tournament was held in August 2020, said the Bangladesh Embassy in Vienna, Austria on Wednesday (July 14).

The event was organized at the Seebarn Cricket Ground with the support of Bangladesh Cricket Club Austria (BCCA), which is playing the Austrian national cricket league regularly and consists of only Bangladeshi-origin cricket players.

Muhammad Abdul Muhith, Bangladesh Ambassador to Austria, Hungary, Slovenia and Slovakia, and Permanent Representative to the UN Offices and other International Organisations based in Vienna, inaugurated the Tournament.

During the prize-giving ceremony on July 12, Ambassador Muhith stated that Bangabandhu Memorial Cricket Tournament would be continued as an annual event by the Bangladesh Mission in Vienna to pay tribute to the Father of the Nation as well as to promote cricket among the youth in Austria.

He added that it was an honour to the country as well as to the Bangladesh community in Austria that in 2021 one of the cricketers from BCCA - Iqbal Hossain - got selected to play for the Austrian national cricket team.

Ambassador Muhith assured the young cricketers of all possible support and cooperation to promote Bangladesh as a world-class cricketing nation within the central European countries and to popularise the game.

Among others, Quinton Norris, Competition Manager of the Austrian Cricket Association and Head Coach of the Austrian National Cricket Team, was present to watch some of the games, while a good number of Bangladeshi community members enjoyed the 11 match-Tournament.