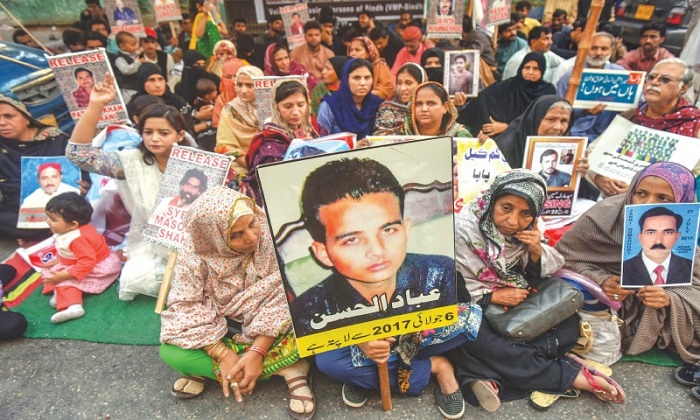 It has been more than two years since his release. But Balach*, who spent a year in a torture cell, still gets flashbacks from the time he spent alone in a dark, cramped cell. His days passed in palpable loneliness with no news from the outside world.

“I was physically tortured for a few days,” he says. “But the biggest torture is to spend a year in a stinky, tiny and dark cell, thinking that soon I will get killed, and my body will be dumped on the roadside.”

Balach’s tale is that of every missing person who has had to endure even a single day of torture in a detention center.

In 2018, having finished his exam, Balach was sitting in the café at his university, when men unknown to Balach approached him from behind. Their faces were covered. Balach’s hands were tied up, he was blindfolded, thrown into a vehicle and taken to an unknown location. A year later it was determined that his abduction was based on misdirected suspicions about his contacts with a wanted man.

For those who are kidnapped or go missing even for a short time, life is never the same if and when they return. Even those who are relatively “lucky” enough to be released, spend the rest of their lives traumatised. Those forcibly taken away to be physically and mentally tortured, often suffer from Post-Traumatic Stress Disorder (PTSD), depression and anxiety when they return.

“Trauma becomes a part of their existential memory,” says Dr Farah Nasim, a private practitioner and psychotherapist who has worked closely with victims of enforced disappearances. “When we talk about recovery, it is just the ability to do the very basics, but even that gets impossible as they develop social anxiety, PTSD and depression.”

But those who suffer being forcibly disappeared and live to tell the tale are not the only ones whose lives are turned upside down. The families of missing persons also undergo collective suffering, dealing with uncertainty for an indefinite period of time.

In 2009, when Dr Deen Muhammad Baloch was abducted by plain-clothed armed men from Ornach in Khuzdar district in Balochistan, his daughter Sammi was only 11 years old.  Since then, she has been marching and protesting for his release. In 2013, Sammi, along with eight other families of missing persons, marched more than 2,000 kilometres from Quetta to Karachi and then to Islamabad for the release of missing persons.

Twelve years have passed since her father’s enforced disappearance, yet Sammi spends every waking hour thinking about him. She is tormented by questions about his well-being and the uncertainty has become unbearable.

“When a dead body is found, I get anxious to know if it’s my father’s or not,” she says. “When mass graves were discovered in Khuzdar, I wondered if one was his,” says Sammi.

Sammi is on medication for PTSD and depression for the last two years. She gets withdrawal symptoms if she skips them even for a day. There are days when the stress of leading a movement for the release of missing persons overwhelms her.

“I feel helpless in front of commissions and courts where I go to plead for the release of my father,” says Sammi. “I am helpless and this helplessness haunts me.”

Many symptoms of mental health disorders, such as PTSD, manifest as physical problems. Sammi’s mother has had physical and mental issues since her husband’s abduction. Doctors say that the underlying issue is mental.

On October 4, 2016, Shabir Baloch was allegedly picked up by security agencies. Since then, his sister Seema has been staging protests at press clubs in Quetta, Karachi and Islamabad for his release. His disappearance has left a pronounced impact on his family’s mental health.

Seema keeps her mobile phone next to her bedside at night. She wakes up anxiously at the first ring, thinking that the phone call might bring some news of Shabir.

“In front of my family, I pretend to be strong, but when it gets tough for me, I can’t sleep,” says Seema. “My husband does not know that I have been taking sleeping pills for the last three years, when I was given false hope that my brother would return… but he still hasn’t.”

Seema’s mother and elder sister also suffer insomnia ever since Shabir’s disappearance and can’t do without sleeping pills either. “There are no psychologists in Awaran and many parts of Balochistan,” she says. “So when my mother’s health deteriorated, we moved to Hub and consulted a doctor in Karachi, who prescribed medication for her that she takes every night. Otherwise she stays restless all night.”

“There is a perpetual feeling of ‘what-if’, a constant anxiety and apprehension,” explains Dr Nasim. “Fear of death and fear of loss becomes their lifestyle and lots of psychosomatic illnesses develop. The punishment is collective.”

The Voice for Baloch Missing Persons claims that several thousands of people are missing in Balochistan alone. However, according to the Commission of Inquiry on Enforced Disappearances (COIED), as of the end of June 2021, 1,482 cases have been registered with it since it was formed in 2011, of which 956 people have returned home. While 31 people have been found dead, 11 have been traced to prisons and one to an internment centre, and 334 cases still remain unresolved.

Journalists who cover the ordeals of missing persons don’t go unscathed either. The late Sajid Hussain, who extensively covered the issue, once said, “The dead do not haunt me as much as the missing do.”

“When you hear about missing persons and their families, you get affected in many ways,” says Karim*, another journalist. “Hearing from a victim that he was given electric shocks on his testicles after which he passed out, or seeing so many daughters and sisters protesting year after year at press clubs — all of this is haunting and damaging for us too.”

Spending just a day being tortured in a detention center can completely alter a person’s life, scarring them for a lifetime. Shayhaq* was abducted from a hotel in a remote town of Balochistan, where he was meeting some friends. His disappearance has had a profound effect on him. Shayhaq’s discernable paranoia and unease is obvious as he recalls the day he was abducted.

“A lot of times when I see security vehicles I get paranoid that maybe they’re here for me,” he says.

The trauma seems never-ending, not only for those who have been made to disappear, but also for the loved ones they have left behind in limbo and even for those who return.