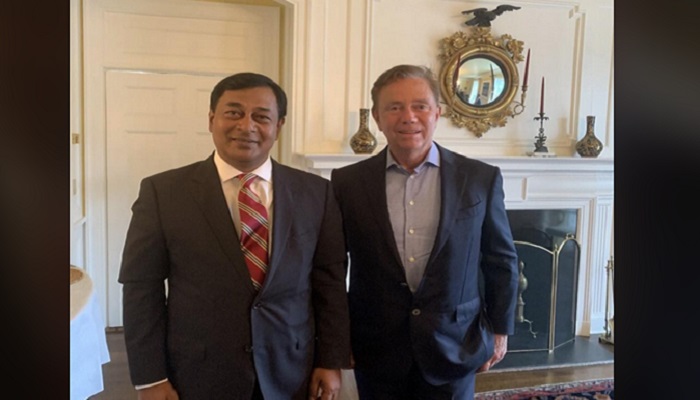 Governor of Connecticut Ned Lamont, an influential Democratic Party leader, has stated that he will help to address Bangladesh’s COVID-19 vaccination needs to cover its large population.

The Governor agreed to explore avenues for commercial supply and co-production of vaccines in Bangladesh with the help of Pfizer global headquarters for the Central Research Division located in Connecticut.

He made this commitment during his meeting with Bangladesh Ambassador to the United States M Shahidul Islam on July 12 at the Governor’s Residence.

During discussions with the Ambassador, Congressman Larson and Congresswoman Hayes assured their engagements to further advance Bangladesh-US cooperation on wide-ranging areas, including trade, commerce, COVID-19 support, and Rohingya repatriation to Myanmar.

The House Representative hoped that Bangladesh would receive a fair share of the COVID-19 vaccines to cover its huge population.

They all vowed to continue to advocate for promoting the interest of Bangladesh and the Bangladeshi Diaspora in the USA. They also appreciated Bangladesh’s ongoing socio-economic progress, including women’s empowerment under the leadership of Prime Minister Sheikh Hasina.