Most of BNP’s five proposals are already implemented: Quader 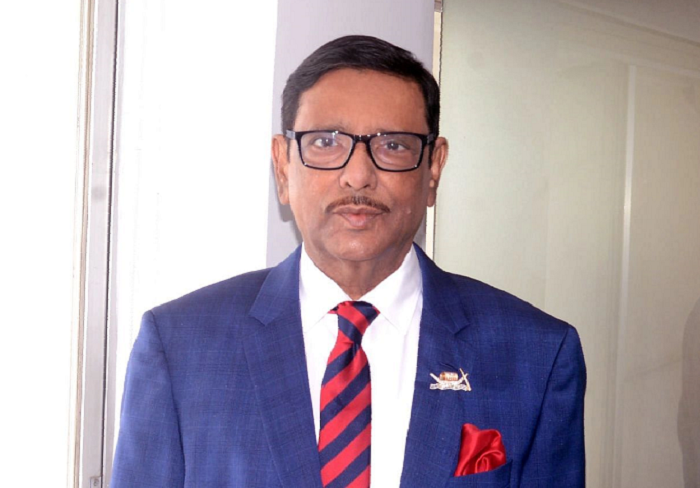 Road Transport and Bridges Minister Obaidul Quader today said most of the five-point proposal placed by BNP over ongoing coronavirus crisis has already been implemented while some of the proposals are under implementation.

“When Prime Minister Sheikh Hasina’s government is working tirelessly to safeguard the life and livings of the people taking experts’ recommendations, BNP is ending its responsibility by placing a five-point proposal staying at home without standing beside the people,” he said.

He said: “Later BNP will start saying one day that if the government accepted the five-point proposal, the situation could have further improved.”

Quader, also Awami League general secretary, said this at a press conference on contemporary issues at his official residence here.

He said BNP’s proposals have nothing new to overcome the crisis as those are repetitions of same things.

He said though BNP gave suggestions to the government, they didn’t utter a single word about what is their own responsibility as a responsible political party.

Keeping safe distance in any disaster or crisis and making talk talks in media are BNP’s old habit and there is no difference in BNP’s habit in this pandemic situation too, he said.

The AL general secretary said despite his unwillingness, Quader has to reply to the propaganda and falsehood of BNP so that the people are not confused by BNP’s falsehood.

Sheikh Hasina’s government is making all-out strides for the betterment of the nation while BNP is spreading falsehood continuously forgetting their responsibility during the crisis moment of the nation and the country, he said.

The AL general secretary said BNP is the common platform of all anti-Awami League forces and they are the confluence of all evil forces that are against the country’s independence and sovereignty and the progress.

BNP led evil forces are still active to pollute the country’s politics, destroy and loot the properties of the people and the country, he said.

He said BNP’s politics is to hide their heads into sand as like as an ostrich to maintain distance from the people in disaster and crisis and the party is following this policy during this coronavirus crisis as well.

On the other hand, the government of Sheikh Hasina stayed beside the people in the past, still stays and will stay with them in the coming days too, he said.

Describing Sheikh Hasina as a tested leader in disaster and crisis, he said the people have trust and confidence in her that she would make her best efforts for the people.