Photo exhibition on the life and legacy of Bangabandhu in Seoul 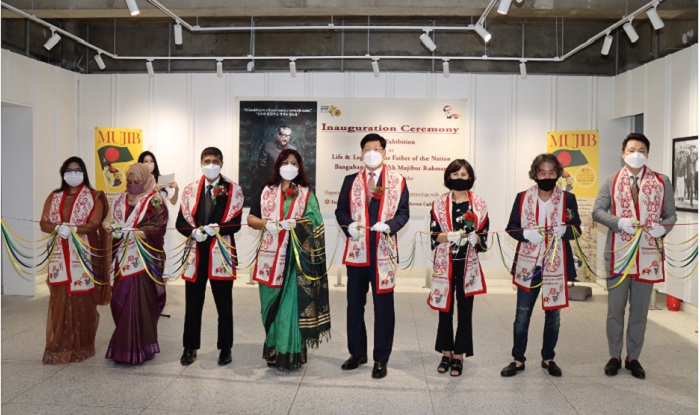 A five-day photo exhibition on the life and legacy of the nFather of the Nation Bangabandhu Sheikh Mujibur Rahman began on Friday (July 9) in Seoul, South Korea.

As part of its ongoing celebration to mark the birth centenary of the Father of the Nation Bangabandhu Sheikh Mujibur Rahman, the Embassy of Bangladesh in Seoul organised this event in partnership with the Korean Culture Association at the THEO Gallery, Gangnam, Seoul.

In her welcome remarks, Ambassador Abida Islam paid profound tribute to the memory of the Father of the Nation Bangabandhu Sheikh Mujibur Rahman-the greatest Bangalee of all time as well as to all the valiant freedom fighters, for whose supreme sacrifices we achieved the independence of the country through nine-month-long historic war of independence led by the Father of the Nation.

She also mentioned that Bangabandhu became the symbol of democracy, peace, and secularism not only in Bangladesh but also in the world and became an ardent advocate of humanity, empowerment of people, protection and promotion of human rights, and socio-economic freedom- which are reflected in the photographs presented at the exhibition.

She also expressed hope that this photo exhibition will generate interest among the Korean people to learn more about Bangabandhu and his vision, ideology and legacy.

Jae-Min Jeong, President of the Korean Culture Association, in his remarks, stated that Bangabandhu fought against the oppressor to establish democracy, peace and human rights of his people and that the birth of Bangladesh would not have been possible without him.

He established the right of the people and the country and therefore regarded as the Father of the Nation of Bangladesh. He thanked the Embassy for associating the Korea Culture Association in this meaningful initiative.

While mentioning about the commonalities between Korea and Bangladesh in terms of history and culture, he expressed hope that this exhibition would be a great opportunity for the Korean people to better understand Bangladesh and the founding father of Bangladesh Bangabandhu Sheikh Mujibur Rahman.

The programme was attended by the Korean nationals, members of the civil society, representatives of the print and electronic media and the expatriate Bangladesh community living in Seoul.

The guests were presented with a copy of the Korean version of ‘The Unfinished Memoirs’-which was unveiled by the Embassy on July 1, 2021.

As part of the event, books on Bangabandhu including the Korean version of ‘The Unfinished Memoirs’, ‘BANGABANDHU THE PEOPLE’S HERO’ and the Historic 7th March Speech of Bangabandhu were displayed along with other publications on Bangabandhu and the invitees were entertained with traditional Bengali cuisine. Moreover, documentaries on the life and works of Bangabandhu will be being screened during the exhibition.

The exhibition will continue till 13 July 2021 and it is open for all.