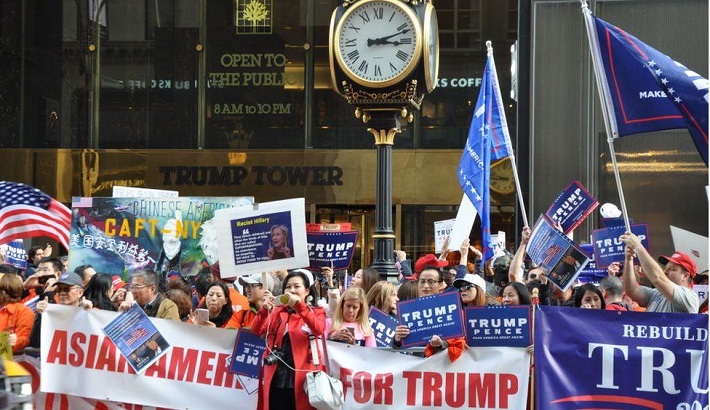 The 33-year-old Australian researcher, who asked that her real named not be used for this article, tiptoes her way through these far-right Chinese-American networks as an "undercover" infiltrator in order to understand how disinformation flows through the diaspora.

"I see similar disinformation every single day," says Ms Wu. "I am fed up with it and curious to check out the origin."

She first noticed a surge of pandemic-related fake news in the overseas Chinese diaspora last summer as coronavirus swept the globe.

To combat the spread of misinformation, she organised a group of hundreds of volunteer fact-checkers to debunk these fake stories, but it didn't take long for them to be overwhelmed by a new flood of misinformation about the US presidential election.

False claims of voter fraud, in particular, spread like wildfire among extremely conservative Chinese immigrants in North America - a small but vocal group among diaspora communities.

Most members of these chat rooms are fervent Chinese-American supporters of former US President Donald Trump, identify as Christian and harbour strongly critical views of the Chinese Communist Party.

Ms Wu doesn't post anything in the chat rooms. She only observes conversations. But other chat participants exchange tens of thousands of messages every day.

Donating to the Proud Boys

Last December, Ms Wu spotted a fundraising appeal to benefit the Proud Boys - a far-right group designated by the Canadian government as a terrorist "neo-fascist organisation" - to cover medical expenses for members who were injured days earlier during a pro-Trump rally in Washington DC days earlier.

The message starts with a poignant line in Chinese - "For those who pave the road to freedom, do not leave them struggling with thistles and thorns" - followed by rose and heart emojis, as well as links to a crowdfunding site.

While the Proud Boys are an anti-immigrant group, in the eyes of the Chinese-American far right, they are freedom fighters against communist forces.

The fundraising message was shared in multiple Telegram chat rooms within hours, reaching tens of thousands of Chinese-American conservatives.

"The more (donations), the merrier," it read.

A dozen donors stated on the fundraising site that they are Americans or Canadians of Chinese, Hong Konger or Taiwanese descent. Some commented in Chinese, wishing the injured Proud Boy members "a speedy recovery".

In less than a month, the fundraiser raised over $100,000 (£72,000), according to data provided by the whistle-blower site Distributed Denial of Secrets and reviewed by BBC News.

Of the nearly 1,000 individual contributions, more than 80% came from donors with Chinese surnames.

A Chinese-American woman who gifted $500 told USA Today: "You have to understand how we feel - we came from communist China and we managed to come here and we appreciate it here so much."

Rise of the Chinese-American right

Chinese immigrants in the US have become a rising force in conservative politics.

Many are propelled to the right-wing political sphere by their opposition to affirmative action, a policy that aims to reduce inequality in education and employment, but is seen by some Chinese-Americans as damaging to the educational opportunities of their children and grandchildren.

Anti-communism beliefs also play an important role in mobilising right-wing Chinese Americans, as some had believed that the Trump administration's hardline policy on China would apply pressure on Beijing and eventually lead to the communist regime's downfall.

"Trump is the most supportive president in American history for China's human rights," says one Chinese immigrant in Los Angeles.

As Beijing tightened its grip over Hong Kong and ramped up military pressure on Taiwan, an increasing number of Hong Kongers and Taiwanese placed hope on Trump's "tough on China" stance.

During the pandemic, an unlikely alliance has emerged between the Chinese-speaking diaspora and American conservatives, as Washington and Beijing clash over the origins of Covid-19.

For strident opponents of Beijing, blaming China for not containing the virus within its borders is another opportunity to condemn the Chinese government.

For the American right, on the other hand, blaming China for the pandemic shifts focus from criticism of the Trump administration's response and plays into the increasingly negative public opinion of China.

The collaboration between former Trump adviser Steve Bannon and Chinese exiled businessman Guo Wengui is a case in point. The duo has been involved in a sprawling digital network that disseminates misinformation about election frauds, coronavirus vaccines and QAnon narratives on multiple social media platforms.

Due to language barriers and news habits, many in the Chinese diaspora tend to read news in closed or semi-closed social media spaces. As there is already an existing trust among participants, the subscribers treat the information with less scrutiny, giving rise to "misinformation echo chambers".

"Once you are exposed to the misinformation network, it's hard to get out," Ms Wu tells the BBC.

When pro-Trump rioters stormed the US Capitol in January, emotions turned frantic both online and offline among the far-right members of the Chinese diaspora.

In the Telegram chat rooms, people were "beyond excited", Ms Wu recalls. They were cheering for the rioters, and celebrating the "overturn" of the presidential election results.

On the same day, the fundraiser for the Proud Boys saw another spike in donations. A donor wrote in Chinese that "we must stop Satan from stealing the election".

Members in the chat rooms had previously planned logistics for the pro-Trump rally in Washington DC, ordering T-shirts saying "Chinese-Americans for Trump" and booking buses from various cities to the nation's capital.

A protester told a conservative Chinese-American YouTuber that the day would mark a new era for Chinese-Americans. "We have truly become Americans. We have finally entered the American political sphere," the middle-aged man says in Mandarin.

It's unclear how many of them went on to breach the Capitol. In a video that later went viral in the Chinese diaspora, it shows Congress in disarray as the Trump supporters flooded the building.

A man shouts the preamble to the US Constitution in Mandarin and English in the background: "We have occupied the Capitol… We the People. Great people!"

But Ms Wu thinks the Chinese-American protesters, though empowered by freedom and democracy in the US, were blinded by political misinformation and showed a lack of judgement.

"They wanted to show 'the people's power' to the lawmakers," she says, "but they had no idea what the consequences may be."

When large majorities of Americans started to condemn the attack on the US Capitol, the Telegram groups swiftly removed the message history related to the riots.

Discussion of Trump's claims has since subsided, but the chat rooms remain active, with members sharing conspiracy theories about the Covid vaccines and President Joe Biden's alleged ties to China.

Many believe baseless claims that Biden is closely co-ordinating with China, or even controlled by Beijing, citing his son Hunter Biden's previous business ties with Chinese companies.

When President Biden skipped a word in a speech touching upon China, Ms Wu recalls, some in the chat rooms concluded that was the US leader "sending a signal" to his handlers in the Chinese government.

In the covert corners of the internet, the Chinese-American far right awaits the next political storm.