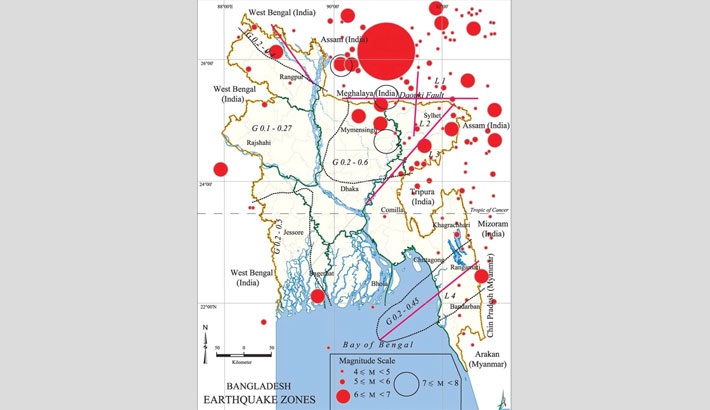 Earthquakes are frequently felt in the northern and eastern parts of Bangladesh because of its location in the junction of tectonically active Indian, Eurasian and Burmese plates which sometimes pose seismic risk for the huge population of this region. Experts of the country believe that about 70 per cent area and 80 per cent people of Bangladesh are at risk. During the last two hundred and fifty years or so, nine earthquakes of magnitude 7.0 or above visited Bangladesh and its surrounding areas of which the nearest and largest occurred on June 12, 1897 of magnitude 8.1.

Besides these, during the last 25 years the country experienced many earthquakes of 4.2 – 6.1 magnitudes within its territory. But 4.1 – 2.8 magnitude quakes of May 29, 2021 in Sylhet area caused much stress to the people and also proved that small quakes might also harm buildings. Earthquake occurs in a certain place when gradually accumulated energy is released through weak planes, geologically called faults. In the same area, earthquakes will return after a certain interval which may take hundreds of years or even thousands.

Our geologists identified such faults which may produce earthquakes in future that include the Dauki fault in the north and the faults along the boundary of the plate on the east. Dauki fault produced three large earthquakes during the last one thousand years, the last event was in 1897. Another great earthquake occurred in the south-eastern coastal areas in 1762 which caused changes in landforms. However, casualties were low because of low population and light infrastructures at that time. A very common saying about earthquakes is that, “Earthquakes don’t kill people; it is the structure that kills people during the shaking of an earthquake.” Nowadays earthquakes are a matter of great concern for us due to huge increases in population and tremendous infrastructural developments.

Now obviously one question may arise that is there any early warning system for earthquakes? It is possible in case of other natural hazards but because of lack of clear understanding of complex tectonic-geologic-geophysical processes responsible for earthquakes, it is not yet possible to develop an effective system.

A very recent news expresses the achievement of ability in issuing alert through cellphone for the residents of the west coast of the USA which would allow 80 seconds time to prepare for an earthquake. Under the socio-economic and cultural conditions of our people it is not certain how far this system would be effective in Bangladesh, however, we can apply it to automatic shutdown of electric and gas supply, to reduce speed of trains, to keep the lift at safe level etc.

But, awareness and preparedness through comprehensive planning are the most effective measures for seismic risk reduction activities. Our recent experience conveys that many panicky people become injured when coming out of homes, offices, industries, educational institutions, etc. or coming down from upstairs during earthquakes.

Awareness and knowledge about personal safety during seismic shaking could help people escape such injuries. Geologically, about 80 per cent of Bangladesh is covered with Holocene unconsolidated sediments, 8 per cent with Pleistocene terraces of red clay-soil residuum and the rest 12 per cent with folded Tertiary sedimentary rocks. During a seismic shaking these sediments, soils and rocks would respond differently because of their differences in physical and geotechnical properties.

Usually during seismic shaking sand-rich sediments saturated with groundwater behaves like a liquid and loses strength resulting in failure to hold buildings on the ground developing subsidence. Thus, the situation would be risky in such an alluvial terrain. Strict compliance of building code during pre-earthquake normal time has also been recognised as the most effective risk reduction scheme. Study of characteristics of seismicity, identification of seismic source and probable size, impact on terrain, formulation of building construction strategy, etc. are very important.

It is also important to study small earthquakes like foreshock, aftershock and earthquake swarms where the former two are related to the main shock of an earthquake produced in a fault or fault-system, whereas the last is not related to any identified fault. But these have a meaningful role in better understanding the earthquake process. Moreover, it may be noted here that an area of about 500 km extending east-west direction at a distance of approximately 60 km in the north of us did not experience earthquake shaking during the last few hundred years. According to many researchers this could be the probable earthquake producing zone which needs attention for geo-scientific investigation.

It is well-known that there are clear-cut and scientifically agreed instructions on what to do before, during and after earthquakes; details of which are beyond the scope of the present discussion. So, through comprehensive planning we should carry on research, build awareness and be involved in preparedness to reduce seismic risk for our huge population. Social scientists, educationists and people’s representatives can contribute significantly in awareness building. Using broadband seismometer, global positioning system and remote sensing technologies, we must increase our capabilities in monitoring, collecting and analysing of seismic data and carry on multi-disciplinary research integrating seismology, geology, geophysics, geotechnical engineering, civil engineering, etc. results of which will contribute to revision of the building code.

It may be mentioned here that we should improve our knowledge and capability to accomplish self-reliance to keep pace with the aspiration to uplift ourselves to the level of developed nations. Thus, improved knowledge would be exercised for awareness and preparedness in seismic risk reduction for our people.