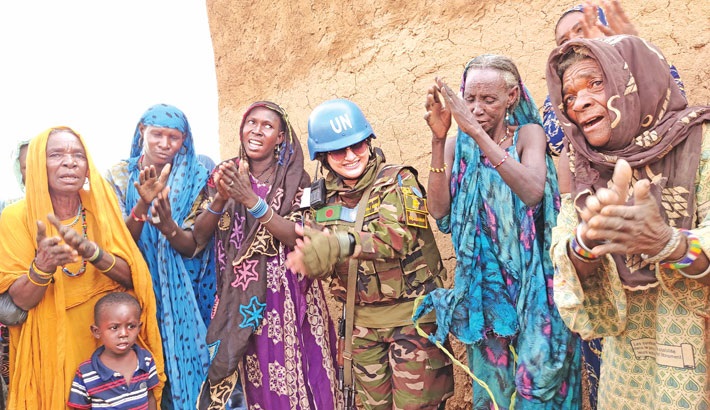 Malian women living in Gao province are dancing and singing with a Bangladeshi female peacekeeper, which is the outcome of excellent relationship between Bangladeshi peacekeepers and civilian population of Mali. —Ahamed Ullah

Female peacekeepers of Bangladesh Army are playing a vital role in the ongoing peace operations of the United Nations Multidimensional Integrated Stabilization Mission in Mali (MINUSMA).

Bangladeshi female peacekeepers have positioned themselves as a driving force for reducing women-based violence and conflict and are also working to ensure the safety of women and children.

They are working for women’s empowerment and also running social campaigns and various CIMIC activities in Mali.

Bangladesh Contingent in Mali has Female Engagement Team (FET), which consists of few highly professional female officers and soldiers who are extremely efficient and knowledgeable.

Currently, 122 Bangladeshi female peacekeepers of Bangladesh Army are deployed in MINUSMA and they perform military tasks together with male soldiers.

UN officials said increasing women’s participation in peacekeeping is recognised as a critical factor for the overall success of such missions.

Major Samsun Nahar, Female Engagement Team Commander of BANBAT-7 MINUSMA, said, “As Mali is a Muslim country. Local women cannot speak with male strangers due to strict cultural customs, but we often get important information from them.”

“Our female members exchanged views with the women and children and we tried to know their problem like abduction, rape and sexual harassment and tried to solve those by us or through UN. Besides, we work for the socioeconomic development of women and children,” she added.

Colonel Zubayer Hasnat, contingent commander of BANBAT-7 MINUSMA, said Force Headquarters and Sector Headquarters have highly appreciated the Female Engagement Team (FET) for proper and efficient discharge of the responsibilities assigned to them in various operations.

“In this context, the Force Commander exchanged views with all Bangladeshi women peacekeepers through VTC and appreciated their professionalism,” he said.

The contingent commander said, “Undoubtedly, this has brought a different message to the contingent and for Bangladesh. In recognition, female soldier Nusrat received the United Nations Peacekeeping Day 2021 Medal.”

El-Ghassim WANE, Special Representative of the Secretary-general (SRSG) and Head of MINUSMA, said, “One of the features of the Bangladesh contingent is female engagement team, which is very significant. As you know it is not always easy to engage women in some location. But female engagement team makes it much easier for the mission to engage women to know their needs.”

He also said Bangladeshi contingent has excellent relationship with the civilian population. “As you know peacekeeping is all about people.”

Lt Col Abdullah Ibn Zaid, director of Inter Services Public Relations (ISPR) Directorate, said, “Those who are our female officers, we call them officers…we do not divide them into women or men. The responsibilities that are given to them are given as officers.”

“The relationship established by the Female Engagement Team (FET) in the local communities has won the hearts of the Malian people,” he added.

Operating in a highly volatile environment in Mali, far away from their families and their countries, peacekeepers make sacrifices in the service of peace every day.

Although Bangladesh joined the peacekeeping mission in the late 1980’s, it took another era for women to participate. In 2000, a five-member female delegation took the message of peace to East Timor for the first time.

The female delegation, which started two decades ago with only five women members, has now more than three hundred women in various UN Missions.

At present, there are 122 women of the Bangladesh Army deployed in different countries. Female members of other forces are also working in different peacekeeping missions.

Besides men, they are playing important role in establishing peace. Not only official or social work, but also the women of Bangladesh are brilliant in leadership qualities.

In the last two decades, around 2,000 Bangladeshi peacekeepers have participated in missions in different countries.

Although the number of female peacekeepers dedicated to establishing peace in different countries of Africa is still much less than that of men. But in the future UN wants to increase this number to at least 25 percent of the total figure.