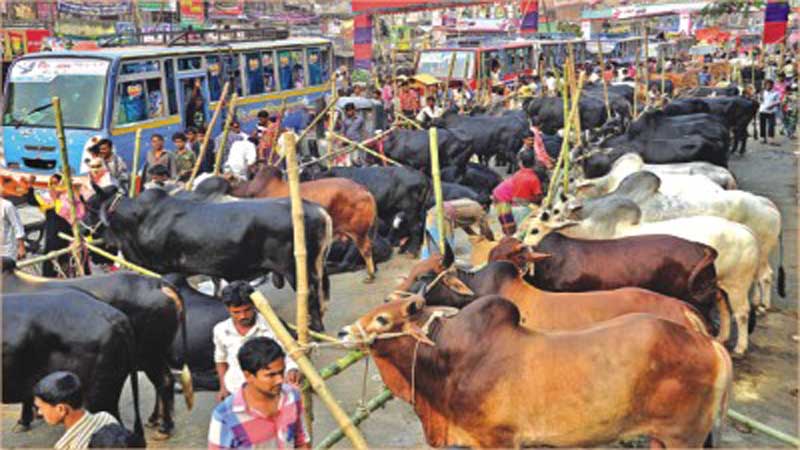 The country is unlikely to face any shortage of sacrificial animals during the upcoming Eid-ul-Azha as there will be adequate supply of locally-reared cattle to meet the demand despite Covid-19 pandemic, according to authorities.

Fisheries and Livestock Minister Sham Rezaul Karim said, "There’re more animals in the country than the number required for the upcoming Eid-ul-Azha."

"This time there’s no need to import as the number of sacrificial animals is much higher in the country,” he said.

Officials at the Department of Livestock Services (DLS) said 1.20 crore sacrificial animals, including 45.47 lakh cows and buffaloes, are available this time compared to 1.18 crore last year. The number of goats and sheep is 73 lakh 35 thousand while that of other kinds of livestock is 4765.

According to the DLS, some 95 lakh animals were sacrificed last year against an estimated 1.1 crore while 1.18 crore animals were ready for sale.

But farm owners and local farmers hinted buyers may have to pay a high price and see a little shortage in the city this year too as a strict lockdown and restriction on movement was imposed before on July 1.

A farmer from Cumilla Shishu Mian said many seasonal farmers were seen busy collecting cattle from them 15 to 20 days ago. But they are not keen to collect now for the restriction as before.

"More importantly, we aren’t selling our cattle to seasonal traders early as they are offering very little price compared to our invested money for rearing this year. So, we’re waiting for a good price," he added.

Amzad Ali, owner of Dhaka-based farm Amzad Agro, said the rearing cost was higher than the previous year which is forcing them to charge a little high price compared to the last few years.

People involved in the trade said a big portion of about 14 lakh cows that farmers rear are for the Eid-ul-Azha markets of the capital city. But the demand was low last year due to coronavirus and floods.

Prices were low at the beginning, but spiked at the end because of fewer animals and more buyers. People, however, are worried about the price of sacrificial animals this year too because of the bad experience last year.

Many city dwellers are trying to make bookings early to avoid the last moment hassles.

Nurul Islam, who lives in Jatrabari, used to buy his sacrificial animal from the makeshift market the day before Eid.

He bought a goat after failing to buy a cow at the last moment last year. "I’m searching for a cow early this year considering my range Tk 60,000 to Tk70000 this time as it is risky to wait until the eleventh hour," he said.

Bangladesh Meat Merchants' Association (BMMA) has taken different programmes to help restrict the entry of Indian cows into the local market as domestically reared cattle get the fair price.

The Border Guard Bangladesh (BGB) was ordered to be strict against smuggling of cows and buffaloes from across the borders as domestic animals will meet the demand and thus ensure that local farmers get the fair price.

President of Dairy Farmers Association Emran Hossain said people will have to bear additional expenses as the price of cattle feed was high in the international market. Most farm owners have spent more money on buying feed for the cattle this year. So, the rate of price will increase by five per cent because of high production cost.

There will be 2,400 cattle markets across the country on the occasion of Eid-ul-Azha while there will be 23 temporary and a single permanent market in the Dhaka city corporation areas.

The DLS officials also told UNB that 1,200 veterinary teams, including 25 teams in Dhaka, would work at the cattle market to stop the use of steroids on animals while officials said the deputy secretary has been tasked with monitoring the markets and the veterinary teams’ activities.

Meanwhile, they said, some 12,340 regular butchers and 10,180 seasonal butchers have been trained to slaughter animals properly.

City markets may face a shortage of cattle and high prices as most seasonal cattle traders are not interested in ferrying the animals due to the restrictions and taking risks.

As most city dwellers wait until the last two days for a shortage of space to keep the animals, many of them have started to book their cattle to avoid the last-minute hassles.

Dhaka-based 700 cattle farms are preparing 10,000 cattle for this year while 40 to 60 percent are already booked, they informed.

Talking to many farm owners it was known that they see small and medium size cattle more in demand but low in supply.

Dhaka's two city corporations have decided to set up 23 temporary cattle markets ahead of Eid-ul-Azha. Of these, 13 haats will be located south of Dhaka, while 10 in Dhaka North City area.

The two city corporations have issued notices for leasing out these temporary haats for animals.

Dhaka's two city corporations said the number of cattle markets will be reduced considering the prevalence of coronavirus. On average 18 lakhs sacrificial animals are sold in the city according to Dairy Farmer's Association.

According to DLS, a total of five thousand farms have prepared 60 thousand cattle while local farmers have also added another 60 thousand this year around Dhaka city.

Commercial farms and non-commercial farmers have started their actitvity in a full swing to exhibit their sacrificial animals for this year through online platforms.

Many customers were found to show their interest in the online cattle market when traders/ local farmers posted photos of their cattle with details of colour and weight.

On the other hand, local farmers are displaying their animals through many Facebook groups, too.

According to the BDFA, online accounted for only 5.5 per cent of the total cattle trade on the occasion of Eid-ul-Azha last year, up from 1 to 2 per cent in 2020.

Local government, Rural Development and Cooperatives Minister Tajul Islam said plans were being made to set up cattle markets in open spaces to reduce the risk of infections. "Last time, selling cows online was encouraged," he said adding, “I myself have opened a few online cattle markets. We’re taking steps to promote it more this time.”