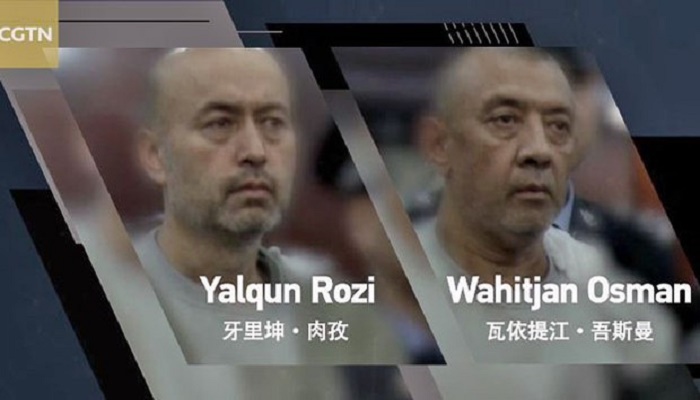 Wahitjan's arrest in October 2016 came amid a deepening crackdown by Chinese authorities on intellectuals in the XUAR that Uyghurs say is part of a deliberate campaign to undermine their culture, religion, and language under the pretext of fighting extremism.

In early April, state-run China Global Television Network (CGTN) broadcast a documentary titled “Challenges of Fighting Terrorism in Xinjiang: The Textbooks” about the arrests of former Uyghur publishing officials and two senior editors of the Xinjiang Education Publishing House for including “separatist thoughts” in Uyghur-language textbooks.

Wahitjan, 58, a prolific poet who has penned hundreds of works admired in both the XUAR and the rest of China, was a senior editor at Xinjiang Education Publishing House at the time of his arrest.

“Under the direction of one of Xinjiang’s top education officials, the 2003- and 2009-edition textbooks contained texts and images that highlighted ethnic hatred and incited separatist ideas among Uygur children and teenagers,” says a brief description of the documentary on CGTN’s website.

Sattar was later charged with “promoting ethnic separatism and terrorist ideology in textbooks” and sentenced to death with a two-year reprieve, according to the documentary, part of a larger four-part series on “fighting terrorism in Xinjiang.”

The documentary made no mention of the punishments handed to Wahitjan and Yalqun, who were described as “two editors with radical separatist thoughts,” instructed to collect more content on “ethnic oppression” for the textbooks. The other three officials were given life sentences.

After the documentary aired, two of Wahitjan’s supporters — Abdushukur Muhammat, a Uyghur intellectual based in Sweden who knows the poet and his works, and Alimjan Inayet, a prominent Uyghur professor in Turkey — collaborated with the detained poet’s Turkey-based daughter, Aykanat Wahitjan, to launch a “Freedom for Poet Wahitjan Osman” campaign on Facebook.

“At this point there have been many different social media campaigns about detained Uyghur intellectuals, but there hasn’t yet been a campaign for Wahitjan Osman,” said Abdushukur, who began posting short passages about Wahitjan in Uyghur, English, and Turkish, last week to refute China’s portrayal of the poet in the documentary and inform the public about his plight.

“Because I know Wahitjan Osman well, and because he is an especially capable person among Uyghur elites, and because I don’t want our elites to be forgotten, I want other people to pay attention to them like we do,” he said.

Abdushukur, who said he has known Wahitjan since 1998, recalled having last seen the poet at an academic conference at Istanbul University in Turkey in 2013.

“I went to the conference, where there were scholars who had come from Beijing, from Minzu University,” he said. “Additionally, I also saw Wahitjan Osman there.”

“We met up there, said our hellos to each other, because we’d always gotten along well,” Abdushukur added.

That same year, a collection of Wahitjan’s poems titled The Talking Bow and Arrow won the Steed Award, a Chinese national-level award for ethnic minority literature, he said.

More than 500 of Wahitjan’s poems were published in various newspapers and journals in the XUAR from 1985 until the time of his arrest, and over 40 of them had been set to music and sung in popular song.

“He has never been the type of person to commit illegal acts,” Abdushikur said. “He is a very polite, moral, and principled person who gave his all to his literary work.”

Alimjan, who also attended the same 2013 conference in Turkey, said that the poet had participated in the event with the express permission of the Chinese government.

Alimjan said that he was deeply saddened by the disappearance of Wahitjan, one of many intellectuals who have been targeted by Chinese authorities. He told RFA that nowhere else in the world are intellectuals called “terrorists” and imprisoned on account of what they have written in textbooks.

“Our intellectuals are among the leading figures in our society,” Alimjan said. “They are the minds of a society. In order to eliminate Uyghur society, the Chinese regime wants to eliminate our minds.”

The crackdown that claimed Wahitjan and his colleagues followed a “strike hard” campaign in 2014 targeting Uyghurs and other Turkic Muslim minorities in the XUAR to combat violent religious extremism.

Those efforts were ramped up after Chinese Communist Party Secretary Chen Quanguo relocated from the Tibet Autonomous Region to assume leadership of the XUAR in late 2016 and ushered in a policy of mass arbitrary detentions in “re-education” camps that have handled an estimated 1.8 million people since 2017.

The sweeping purge of intellectuals — as well as the camps, forced labor, and other abuses — are among serious human rights problems that have been cited as evidence of genocide of the Uyghurs by the U.S. government and some European parliaments this year as international scrutiny mounts.

China angrily rejects genocide accusations and says the camps are vocational training facilities to combat terrorism in the region, but government documents and detailed reports by credible news organizations and rights groups, indicate extensive and systematic suppression of the Uyghurs by Chinese authorities.

In September 2016, XUAR Bureau of Education authorities announced a new policy implementing “national language teaching”— code for Mandarin Chinese instruction — in kindergartens, primary schools, and secondary schools throughout the region. It was after that that officials said the textbooks incited “separatist thoughts,” according to the Uyghur version of events.

The CGTN documentary says that in 2016 there were “reports of errors” in the 2003 and 2009 editions of the Uyghur-language textbooks for primary and middle school students. Some of the problems cited were cover design and illustrations that contained the national emblems of East Turkistan — the name many Uyghurs prefer for their homeland — and “fabricated” stories of heroic Uyghurs.

“[The] investigation found that a large quantity of material inciting extremism was included in the textbook,” the documentary said. “From 2004, these textbooks were used region-wide for 13 years.”

In the case of the Uyghur-language textbooks, the Education Department and the government itself approved all the content, so the books were published according to the law, Alimjan said.

“To say that something is illegal two years after saying it was legal is, in actuality, a violation of Chinese law and of the laws of other countries,” he said. “There is absolutely no proof that Wahitjan Osman or the others committed any sort of crime.”

Chinese authorities have arbitrarily detained professors, researchers, and academics in the camps as part of the policy to eliminate Uyghur culture, Alimjan said.

“These people were detained as part of a clear plan,” he said. “By eliminating intellectuals, by means of detaining them, they have made it a goal to block the cultural development of the Uyghurs, to leave Uyghurs culturally “behind” and in a “backwards” state. We can see this as part of a plot.”

Wahitjan’s daughter, Aykanat, told RFA that she first learned of her father’s detention from a list of detained Uyghur intellectuals that had been published on social media.

The first official Chinese government report she had seen about accusations of “terrorism” against her father came at news conference in China on April 3, a day after the airing of the documentary on the textbooks, where officials mentioned some of the intellectuals arrested, including Wahitjan, and issued a photo of him and Yalqun Rozi, though they gave no details about the two men, she said.

“In addition to that, they also gave the reason why he was arrested, but they didn’t say anything other than that,” she said. “Nothing about how many years [he was sentenced to] — nothing else.”

Aykanat said she has been very worried about her father’s condition during the nearly five years since his arrest.

Abdushukur Muhammat called on international human rights organizations and Western democratic governments to pay special attention to the plight of Uyghur intellectuals such as Wahitjan who are locked up in Chinese prisons.

“I hope that human rights organizations and the kinds of people who are concerned about the fate of Uyghur intellectuals will also pay attention to what has happened to Wahitjan Osman,” he said.