Fisherman finds an unopened bottle of whisky inside a fish 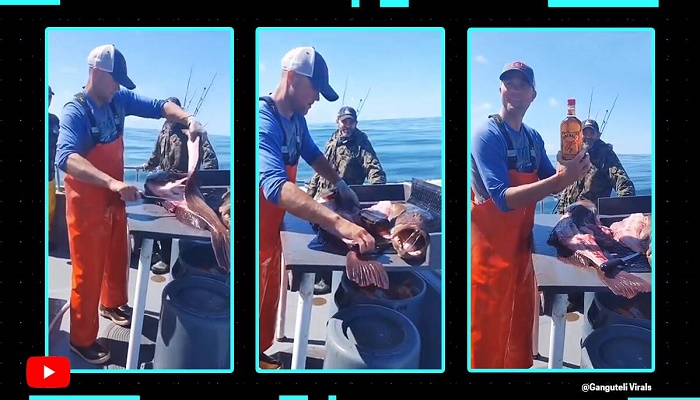 A fisherman's catch of the day turned out to be a surprise as the fish that was reeled in had something extra in its belly.

A TikTok video shows the man cutting open the fish to find an unopened bottle of whisky inside the stomach.

It is not sure where the two fishermen were on the open ocean. But the video was intriguing enough to go viral on social media.

The short clip shows a fisherman on a boat cutting a fish on a table to be filleted. He first carves off a large piece and then starts working on the innards.

But then, he notices something strange in the stomach and cuts the organ. Much to his surprise, the object turned out to be an unopened bottle of Fireball Whisky.

The video has now been shared on YouTube and other social platforms. On TikTok, users speculated if the footage was real and if the fish actually managed to eat the bottle in whole.

Some users said that the fishermen probably shoved the bottle down the throat of the fish after reeling it onboard.

It is not unusual for ocean animals to swallow non-living things.

It's a well-known fact that plastic has caused a great deal of harm to the oceans and everyday creatures are found with solid objects or non-biodegradable objects in their stomachs.

Earlier this year, the biologists at the FWC Fish and Wildlife Research Centre in Florida were startled by an unusual discovery in the stomach of a largemouth bass fish.

The biologists found a little turtle who was alive and well inside the fish's stomach.

Earlier this month, a group of 35 fishermen was sailing in the Gulf of Aden off the coast of Seriah in southern Yemen when they suddenly came across the carcass of a giant sperm whale.

When they cut the carcass open, they found a huge mass of waxy and black sludge inside the stomach of the animal. They had actually found ambergris (whale vomit) worth a whopping  $1.5 million.