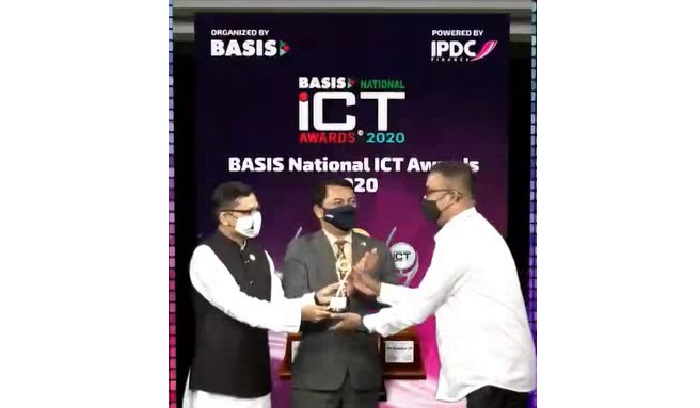 Eagle BD Police application, currently running with Shahbagh and Ashulia police stations on trial basis and set to be introduced in 50 police stations under the jurisdiction of Dhaka Metropolitan Police (DMP), has received the national ICT Award from the BASIS.

State Minister for ICT Division Zunaid Ahmed Palak handed over the award at a ceremony at a private TV station Sunday.

Commerce Minister Tipu Munshi was present as chief guest at the ceremony, organised by BASIS.

This digital application service will provide security to women and children in a quickest possible time.

A couple of taps on the App of one’s phone is enough for nearest police officer to rush to the victim’s location and rescue her.

After covering DMP area, Eagle BD Police will be introduced at all the police stations across the country to ensuring safety of women and children.

The Eagle app will function both online and offline, 24/7. A tap on the app will send the victim’s GPS location to their parents and the nearest police station, and policemen will immediately rush to help.

The alert, which includes the victim’s photograph and phone number in addition to their location, will be accompanied by a siren at the police station.

This is a unique app with which criminals can be spotted on the streets or even inside a building in short time.

Police can call the victim instantly, as can parents. This way, police will be able to rush to the spot and rescue the victim in the shortest possible time.

Police officials involved in initiative believe there will be no scope for negligence, as the app will keep track of police response.

CSL’s sister concern Backdoor Private Limited is executing the app. It has already trained the officers-in-charge (OCs) and sub-inspectors (SIs) of all 51 police stations under DMP on how to run the app.