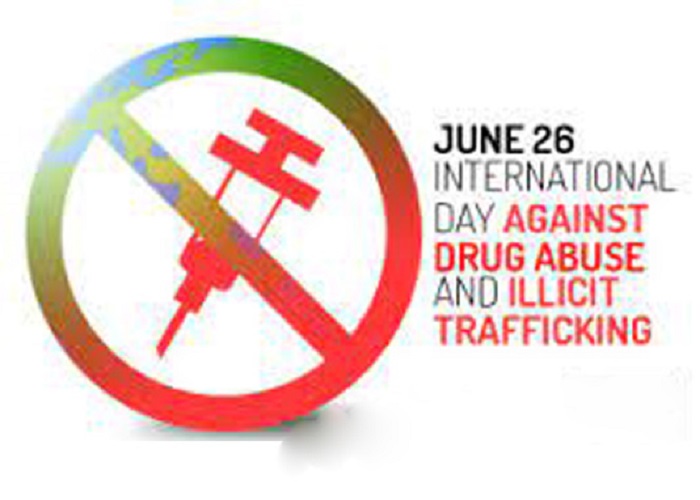 The International Day against Drug Abuse and Illegal Trafficking will be observed in the country like elsewhere in the world tomorrow with a call to launch a united movement against the menace.

President M Abdul Hamid and Prime Minister Sheikh Hasina gave separate messages on the occasion, urging all concerned to work along with the government to prevent drug abuse.

In his message, the President said the present government has taken zero tolerance policy against drug and its illicit trafficking and a large section of drug traders has already been brought under the law.

Bangladesh is a signatory to all international conventions on drug control, he said, adding that in this regard, Bangladesh has concluded bilateral agreements with several neighboring countries.

Article 18 of the Constitution defines the principles of drug control, he added.

The 'Drug Control Act' has been enacted to implement these principles and the framework of international conventions, the head of the state said.

He said it is important to strengthen the patrols of the law enforcement agencies in the country's border and coastal areas to prevent drug smuggling alongside conducting regular anti-drug operations.

He hoped that through regular anti-drug campaigns, it will be possible to stop the spread of drugs in the country and the youth will move forward on the path of a beautiful and bright future.

Laying emphasis on creating awareness among the youth community about the harmful consequences of drug, he said family can play a vital role in this regard as strong family bondage helps keep children away of drug abuse.

Prime Minister Sheikh Hasina, in her message, said the government has initiated many programmes, including stringent execution of the anti-drug law for protecting the country and its people from the drug abuse and its trafficking.

The premier added that the election manifesto of the present Awami League government in 2018 has clear goals and plans for drug control.

“We are implementing various activities to protect the youth from drug addiction. Our government has provided grants to 91 private drug addiction treatment centers in the last financial year and has increased the amount of grants in the current financial year,” she said.

In the meantime, plans have been taken to set up 200-bed drug addiction treatment centers in 7 divisional cities with government funding, she said, adding that the present government is working relentlessly to implement the goals of the SDGs and gradually reduce drug addiction in the country to zero.

She said timely steps taken by the government, illegal trafficking in the border areas has come down a lot and necessary steps are being taken to reduce it further.

The country and the nation must be saved from the drug abuse, she said, adding that drug supply and trafficking must be curbed at any cost.

She urged all to work along with the government to prevent drug abuse for building a golden Bangladesh as dreamt by Father of the Nation Bangabandhu Sheikh Mujibur Rahman.