One dead, 99 unaccounted for in Florida building collapse 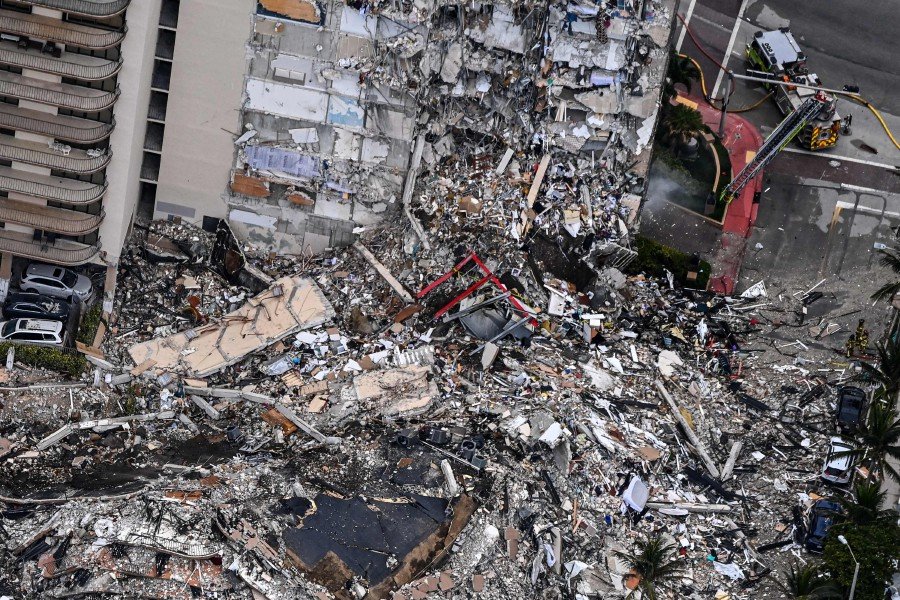 A high-rise oceanfront apartment block near Miami Beach partially collapsed early on Thursday (Jun 24), killing at least one person and leaving 99 unaccounted for, with fears the toll may rise much higher as rescuers comb through the rubble.

An unknown number of residents are feared to have been asleep in the 12-story building, in the town of Surfside, when the overnight collapse reduced a large portion of it to rubble, exposing the interiors of gutted apartments.

"One side of the building just fell completely. It doesn't exist anymore," said Nicolas Fernandez, 29, an Argentinian resident of Miami who had yet to hear from friends who were staying overnight in his family's unit in the building.

Police said they were still without news of 99 people who may have been inside the apartment block at the time it collapsed.

"That could be for different reasons, we're still in the early stages," Freddy Ramirez, director of the Miami-Dade Police Department, told a news conference.

So far 102 others have been accounted for, Miami-Dade Mayor Daniella Levine Cava told a news conference.

The Federal Emergency Management Agency will step in to help with recovery efforts, she said.

At least 18 Latin American nationals are known to be among the missing, according to the country's consulates. They are three Uruguayans, nine Argentines and six Paraguayans, among them the sister of the country's first lady.

Surfside also has a large Jewish population and several rabbis were at the scene to help with rescue operations.

Around 55 apartments were affected by the collapse, according to Miami-Dade Fire Rescue Assistant Chief Ray Jadallah who told a news conference that emergency services arrived at the scene at around 1:30 am, evacuating 35 people from the building.

The building was occupied by a mix of full-time and seasonal residents and renters, and officials have stressed it is unclear how many people were actually inside at the time.

"It's hard to get a count on it," Miami-Dade County Commissioner Sally Heyman told CNN. "You don't know between vacations or anything else," she said. "The hope is still there, but it's waning."

Some residents were able to walk down the stairs to safety while others had to be rescued from their balconies.

One death was confirmed by Surfside mayor Charles Burkett, and Heyman said about 14 survivors had been recovered from the rubble.

"It's a really, really tragic situation so we'll hope for the best in terms of additional recoveries, but we are bracing for some bad news just given the destruction that we're seeing," Governor Rob DeSantis told a news conference.

As hope receded of finding more survivors, the focus was on the recovery of possible victims amid the rubble, in a massive operation assisted by drones and dogs and involving dozens of police and firefighter units.

"Apparently when the building came down it pancaked, so there's just not a lot of voids that they're finding or seeing from the outside," Burkett said on NBC's Today show.

"I say to the people of Florida, whatever help you want, that the federal government can provide, just ask us, we'll be there," he said.

Surfside's mayor said the reasons for the collapse were still unclear.

"It looks like a bomb went off, but we're pretty sure a bomb didn't go off, so it's something else," Burkett said.

Fernandez, the Argentinian resident of Miami, said that when his mother called him in the early hours to say the building had collapsed, he thought it was a joke - and hung up.

"She calls me again and tells me: 'Nico, you know I would never joke about this. I need you to go over there.' We came running."

One witness, 25-year-old Julian Targowski, described the sound of the collapse.

"It was like a very bass-y, like boom boom, boom boom, that kind of thing," he told local television WFOR.

"Like, a ton of bass on a subwoofer, basically, like just two of them," he said. "Then my friend texted me that a building had exploded."

Local media said records showed the block was built in 1981 and had more than 130 units inside.

Heyman told CNN the building had been undergoing construction work on its roof, although she also stressed the reasons for the collapse were not clear.