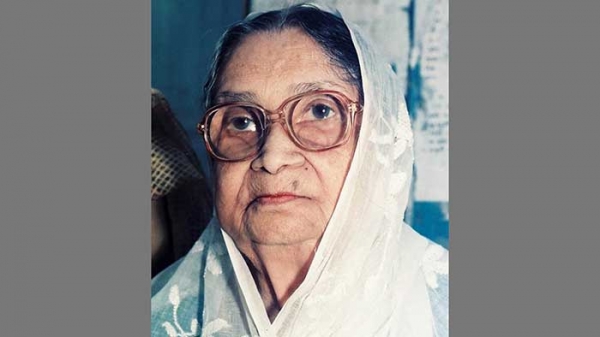 Sunday marks the 110th anniversary of the birth of poet and feminist Begum Sufia Kamal.

Also revered as the trailblazing woman rights activist, poet and  educationist who took part in the Bengali nationalist movement of the 1950s and then established herself as one of the iconic civil society leaders in independent Bangladesh, Sufia Kamal was born on June 20, 1911, at Shayestabad, Barisal in then British India.

The day is being observed in befitting manners by different socio-cultural organisations.

Commemorating the day, several socio-cultural organisations including Bangladesh Mahila Parishad (BMP) and Chhayanaut are organizing special programmes in remembrance of the poet and activist.

However, due to the ongoing second wave of the COVID-19 pandemic, both organizations are celebrating the day with virtual programmes.

Celebrating the founding president's birth anniversary and the return of monsoon,  country's leading cultural institution Chhayanat has been organizing a commemorative event every year, which could not take place last year due to the COVID-19 situation.

This year, Chhayanat is organizing a special online event featuring songs, poems and dances of the rainy season, alongside a special speech of Sultana Kamal, daughter of the eminent poet and a member of the advisory council of Chhayanat, noted human rights activist and former adviser to the Caretaker government of Bangladesh.

The programme will be telecast through the digital platforms of Chhayanaut including its Facebook page and YouTube channel on Sunday at 9 pm.

A woman ahead of her time and her contemporaries, Sufia Kamal was instrumental in naming the first women’s dormitory of Dhaka University as Rokeya Hall after the name of Begum Rokeya, the legendary educationist who was her own inspiration. She went on to become a civil society leader and a pioneer activist for women’s rights.

As a brave social activist, Sufia Kamal played active role in the 1952 language movement, the oppressions against the nation before and during the 1971 Liberation War and took part in every major human rights movement in Bangladesh till her demise.

Despite lacking formal education during her childhood, she learned multiple languages at her home including Bengali, Hindi, English, Urdu, Arabic, Kurdish and Persian. Her first book of poems, Sanjher Maya (The Eventide Spell), was published in Kolkata in 1938, which were praised by legendary litterateur Kazi Nazrul Islam and Rabindranath Tagore.

As a poet and writer, she then went on authoring more than a dozen volumes of poetry and several volumes of short stories, short novels, travelogues, etc. Her documentary book Ekatturer Diary (Diary of 71) narrated the horrific stories during the 1971 Liberation War. She was the founding editor of Begum, Bangladesh's maiden women’s magazine.

Begum Sufia Kamal passed away on November 20, 1999. For her tremendous contribution in the society, she became the first woman to receive a state funeral in Bangladesh.