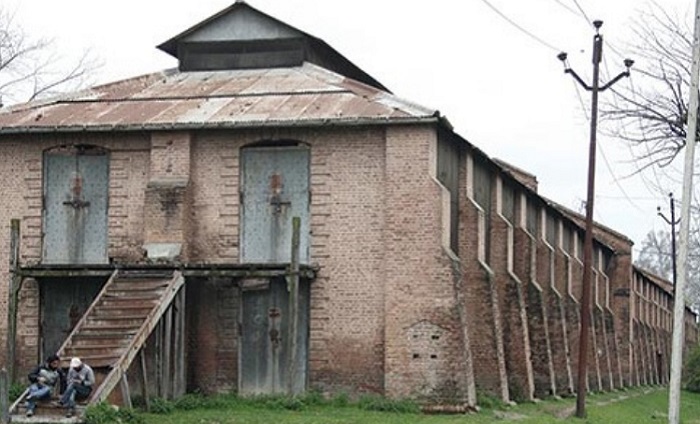 Though the history of the silk industry in Kashmir can be traced as early as the 7th century A.D in Xuang Zang travel accounts, it was in 1819, when Sultan Zain-ul-Abidin introduced silk to the inhabitants of Kashmir and paid great attention towards the development of the silk industry.

In 1846, during Gulab Singh’s rule, silk had become an important article of trade and was exported to other parts of India in large quantities.  By the 1860s, Kashmir silk was an international brand sold across Europe.

However, 202 years down the line, the silk industry, now known as the sericulture industry, in Kashmir is dying a silent death.  In 1989, one of the world’s oldest and largest silk factories in Srinagar’s Solina area which is locally known as Resham Khana had to be shut, rendering thousands of cocoon farmers jobless.

The other two prominent units at Rajbagh and Bemina Silk factories in the city were also left deserted.

Over the years, the silk industry in Kashmir has witnessed many lows. In 1878, the epidemic "Pebrin" destroyed the whole silk crop, almost wiping out the industry in the erstwhile state. As per the records, 127 rearing houses built in 1869 only two survived, one at Raghunathpura (Srinagar) and other at Sherpura (Anantnag).

In 1889, the government of that time decided to revive the industry and in the year 1897, Directorate of Sericulture was established under C.W.Walton who had vast experience in sericulture.

As per the latest figures, there were nearly 27,000 cocoon-producing farmers in the Valley.

In the present scenario the silk industry has been established across 20 districts of Jammu and Kashmir.

Nearly three decades after the silk industry witnessed its last bloom, the government is now making a massive push to its infrastructural facilities.

Thakur along with Joint Secretary Ministry of Agriculture Government of India Shubha Thakur visited Silk and Wool units of JKI Ltd located at Rajbagh and Bemina and took stock of the ongoing works.

The duo were briefed that under modernization of the Silk Factory Rajbagh new machinery has been procured to replace the defunct ones which had been damaged during the floods of 2014 and a new building is also being constructed.

“The silk fabric production capacity of the factory is expected to increase to around 2.5 lacs meters annually when the said modernization would be completed,” an official handout from I&C department reads.

With the modernization of the Silk Factory Rajbagh and the establishment of new Silk Reeling and Weaving units in Jammu, JKI would be procuring around 1.30 MT of cocoon worth Rs 11.24 crore in the current year in both Kashmir and Jammu divisions which would result in providing direct market linkage to around 10000 cocoon rearers of J&K.

In 2018, during J&K Trade & Export Policy 2018-28, the government released a booklet titled “Reliving & Reviving Jammu Kashmir Silk” which deals with the importance and promotion of silk industry in the erstwhile state.

According to the booklet, there are 2800 villages and 33000 households in which sericulture is generating an income of Rs 2026 lakh annually.

“Till 1989, the government had a monopoly   over the cocoon produce. Jammu Kashmir Industries used to buy the product from farmers and sell it in a market,” Qadri said.

He said, “However, post 1989, the government decided to hold an open auction under which many private players came into play and are now buying the cocoon directly from the farmers.”

Qadri said at present 70 percent of the cocoon is bought by the buyers coming from other parts of India mainly- West Bengal, Maharashtra and Karnataka.

“The remaining 30 percent is either bought by the JKI or the local private players,” he said.

“Last year, due to circumstances, we only managed to buy 75 MT of cocoon from farmers. But this year the aim is to purchase at least around 140 MT,” Wani said. “And in the coming years the target is to procure 240 MT annually so that farmers can reap the maximum benefit from their produce.”

Abdul Rashid Dar, a cocoon farmer from Pulwama, said that the intervention of JKI has been a helping hand for the growers to sell their product at reasonable rates.

“For the past two years, the private market has been facing a decline. So, last year we sold our goods to JKI at a reasonable rate,” Dar said.