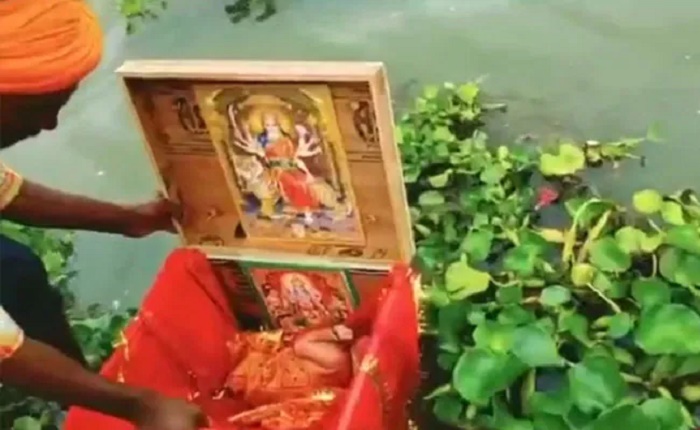 A boatman in India's northern Uttar Pradesh state is being praised after he rescued a baby girl found floating in a wooden box in the Ganges river.

Gullu Chaudhary said he was alerted by the cries of the 21-day-old and found her wrapped in a red scarf in the box decorated with images of Hindu deities.

The baby has been taken to hospital and her health is being monitored. She will be sent to a shelter home later.

Officials are investigating how the baby landed up in the river.

They have not speculated on possible motives for the abandonment, but India's gender ratio is one of the worst in the world. Women are often discriminated against socially and girls are seen as a financial burden, particularly among poor communities.

Although most unwanted female foetuses are aborted with help from illegal sex determination clinics, cases of baby girls being killed or abandoned after birth are not uncommon either.

Police said the box had a birth horoscope card which had the time and date of the baby's birth, and mentioned her name as Ganga - the Hindi name for river Ganges.

The state government said it would bear the costs of the baby's nurturing. Chief Minister Yogi Adityanath announced that the boatman would be rewarded with government benefits, including a house, for showing a "matchless example of humanity".

Officials in Ghazipur district, where the baby was rescued, told reporters that District Magistrate MP Singh had checked on the baby and that officials were also sent to meet the boatman.

Mr Chaudhary told local reporters that when people on the river bank heard the baby girl's cries, no one stepped forward to help. "But I rushed to rescue her. When I opened the wooden box, I found her."

The incident created a stir as a crowd gathered on the banks of the river. Videos shot at the scene showed the boatman picking up the box from the water and cradling the newborn in his arms.

He then took the baby to his house from where police picked her up and the child welfare officials took her to hospital.