Japan set to ease virus emergency ahead of Olympics 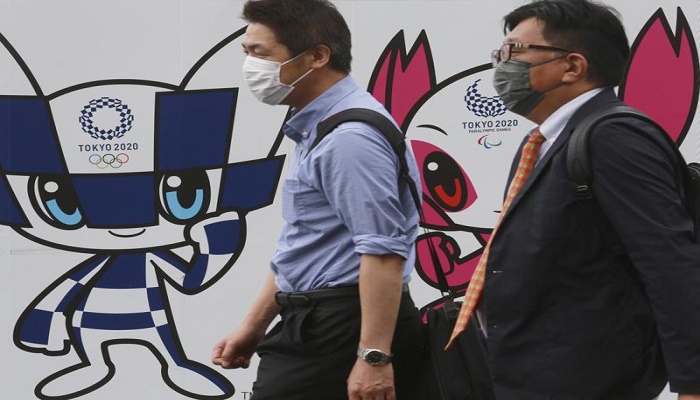 Japan on Thursday was expected to announce the easing of a coronavirus state of emergency in Tokyo and six other areas, with new daily cases falling just as the country begins making final preparations for the Olympics starting in just over a month.

Japan has been struggling since late March to slow a wave of infections propelled by more contagious variants, with new daily cases soaring above 7,000 at one point and seriously ill patients straining hospitals in Tokyo, Osaka and other metropolitan areas.

Daily cases have since subsided significantly and Prime Minister Yoshihide Suga was expected to allow the downgrading of the state of emergency when it expires on Sunday to less stringent measures. The new measures would last until July 11 — just 12 days before the Olympics begin.

Despite concerns by some medical experts and the public over the potential risks of holding the Olympics, Suga has said he is determined to hold a “safe and secure” Games starting July 23.

Holding the Olympics before elections in the fall is also a political gamble for Suga, whose support ratings have tumbled over dissatisfaction with his handling of the pandemic, a slow vaccination drive and a lack of explanation about how he intends to ensure the virus doesn’t spread during the Olympics.

“We must do everything we can, and provide firm financial support as well,” to minimize risks of a resurgence of the infections, said Dr. Shigeru Omi, head of a government COVID-19 panel.

Japan does not enforce hard lockdowns and the state of emergency allows prefectural leaders to order closures or shorter hours for non-essential businesses. Those that comply are compensated and violators fined. Stay-at-home and other measures for the general population are only requests and are increasingly ignored.

At a parliamentary Health and Labor Committee last week, Omi cautioned that holding the Olympics in the middle of the pandemic is “abnormal” and warned that it would increase the risk of infections.

A team of experts released a simulation Wednesday showing a possible upsurge of the infections during the Olympics if spread of the new variants and people’s movements increase under eased emergency measures.

Health Minister Norihisa Tamura told reporters Thursday the government would not hesitate issuing a state of emergency even in the middle of the Olympics to protect the people’s lives and health.

The state of emergency will remain in Okinawa, where hospitals are still overwhelmed, while Hiroshima and Okayama will be taken off the list. Suga was expected to announce a final decision later Thursday.

Ryuji Wakita, the director-general of the National Institute of Infectious Diseases who heads a government COVID-19 advisory board, said that infections have decreased in many areas, but the slowing has bottomed out in the Tokyo region. He warned that infections could increase and that signs of a rebound are already seen among younger people.

Even as more people are getting the jabs and most of the country’s 36 million senior citizens are expected to be fully inoculated by the end of July, younger people are largely unvaccinated and infections among them could quickly burden hospitals, Wakita said.

“In order to prevent another upsurge, it is crucial to prevent the people from roaming around during the Olympics and summer vacation,” he said.

Experts say it is crucial to accelerate the vaccine rollout for the Olympics to be safe.

Suga has opened up mass inoculation centers and started vaccinations at major companies, part of an ambitious target of as many as 1 million doses per day. As of Wednesday, only 6% of Japanese were fully vaccinated.

In hard-hit Osaka in western Japan, hospital capacity has improved and new infections dropped to 108 on Wednesday, down from more than 1,200 a day in late April.

In Tokyo, new cases are down to around 500 per day from above 1,100 in mid-May. Tokyo Gov. Yuriko Koike has said effective virus measures need to be kept in place.