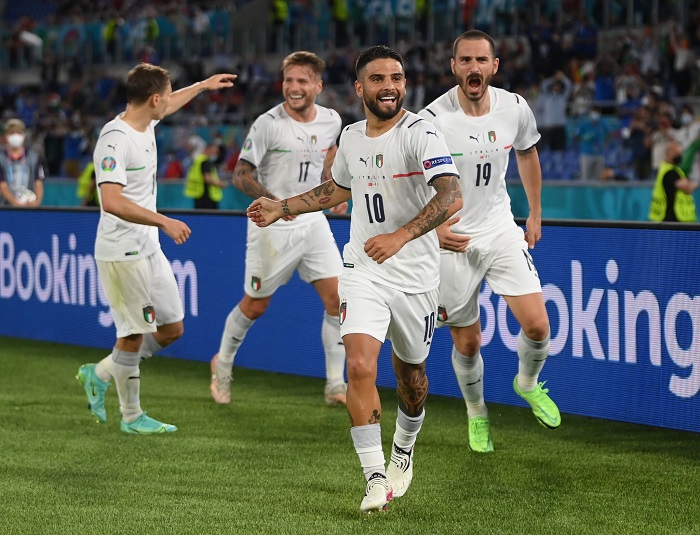 Lorenzo Insigne (No 10) celebrates his third goal, which capped a dominant opening win for Italy

Euro 2020 is finally under way, and Italy are back, and nature is healing. On a taut and muggy night in Rome, a crowd of 16,000 were treated to a vivid display of smart, patient attacking football: a statement performance that instantly marks Roberto Mancini’s side out as one of the favourites for the tournament. And yet perhaps the symbolism of the occasion was greater still. Three decades after Italy last hosted a major tournament, five years after they last competed in one, 15 months after this fixture was postponed in the most disorienting and dreadful of circumstances, this felt like a sort of rebirth: a celebration of sport and congregation and the importance of savouring every last moment.

From the first whistle Italy set about the much-fancied Turks with a restless, percussive impatience. Their press was smart and well-organised, their movement on and off the ball exquisite. And yet after a frustrating goalless first half you wondered if the weight of expectation might just get to them. Instead, with an emotional maturity that has not always been the hallmark of Italian teams past, they plundered three unanswered goals, building an irresistible momentum that Turkey were powerless to arrest. “The crowd helped us,” Mancini admitted afterwards. “It was crucial for us to move the ball quickly.”

Left-back Leonardo Spinazzola, one of the best players on the pitch, went even further, declaring it a “perfect performance”.

For once, this is an Italy side that may be greater than the sum of its parts. Perhaps they lack a little genuine star quality, which may come to bite them in the later stages. But Domenico Berardi and Lorenzo Insigne are a fine pair of wingers, Jorginho was at his creative best in midfield and on the left flank Spinazzola was given the license to get forward and threaten. The brilliant Federico Chiesa, given a 10-minute cameo here, still has plenty to offer. These are exciting times to be an Italy fan.

And yet perhaps the defining motif of this game came right at the end. As Turkey poured forward in search of a late consolation, in stepped the veteran defender Giorgio Chiellini to make a decisive tackle, before celebrating wildly with his teammates. Never mind that Italy were already 3-0 up and had enjoyed 24 shots to Turkey’s one. For the 36-year-old Chiellini, a man who has worn Italy’s multiple tournament failures like a scar on the heart, this was a matter of pure professional pride.

But first, of course, there was a predictably immoderate opening ceremony to be dispensed with: a spectacularly vaudeville affair featuring some weird semaphore with bouncing inflatable balls, enough soldiers to take over North Tyrol, lots of coloured smoke and Andrea Bocelli offering a spine-tingling rendition of Nessun Dorma.

For once, though, the theatrics and the bombast felt appropriate. As the final notes of the national anthems drained away, the Olimpico was filled with a grateful, guttural, cathartic roar. Football. Nations. Lots of people in the same place. Grown adults yelling. How we’ve missed this, all of it.

And after a nervy start, Italy soon took control, dominating territory and possession. Insigne and Chiellini both had good chances. Before long, Turkey had all but retreated to the edge of their 18-yard area, leaving only the veteran striker Burak Yilmaz up to gamely run the channels. Clearly the strategy was to soak up pressure and then counter. But with Yilmaz hopelessly isolated, and Italy strangling Turkey’s out-balls at source, they essentially had nothing to offer this game but blood, sweat and naughty tactical fouls

“It was not our day,” coach Senol Gunes admitted afterwards. “We started to lose the ball and couldn’t get forward.”

Seven minutes into the second half, the game finally broke. All night long Berardi had been cutting in on his stronger left foot, forcing left-back Umut Meras to track him. Now, with a wriggle and a dance, Berardi feinted back on to his right, leaving Meras trailing in his dust. The cross was hopeful rather than precise, and yet Merih Demiral was unable to prevent the ball from hitting him in the chest and cannoning into the net.

With 25 minutes remaining, Berardi hung the ball up to the back post, where Spinazzola took a touch, took a shot and forced a fingertip save from Cakir. With the ball running loose, Immobile pounced: smashing it gleefully into a goal he has hit so many times with Lazio, but not once in national colours. And so as the ball hit the net, it felt like an intensely liberating moment not just for Italy but for Immobile himself: a man who had finally done it on the very biggest stage of all.

But Italy had saved the best for last. Again their press was ruthless as Cakir skewed a horrible clearance straight to Berardi. In a flash Italy were away again: three crisp passes moving the ball right to left, a delicious curling finish from Insigne. It’s been a long five years. But as the Olimpico rose in acclaim, you wondered whether it might just be worth the wait.