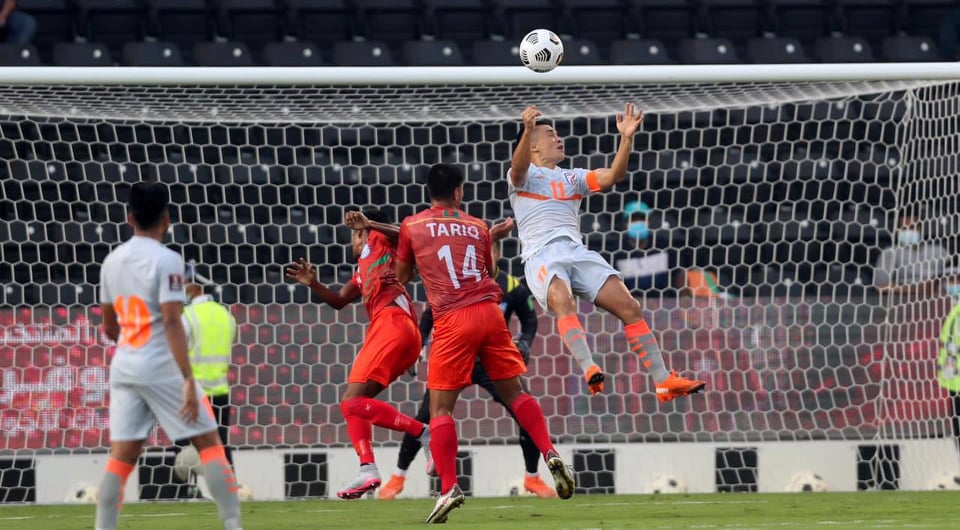 With the feat, India reached the third position in Group E with 6 points from one win and two draws as well as brightened their chances for a direct entry in the upcoming third round of Asian Cup 2023 qualifiers.

On the other hand, Bangladesh remained at the bottom place with their previous two points from two draws. The men in red and green will now face Oman in their last match of joint qualifiers on June 15 at the same venue.

The men in red and green previously beat their neighbouring counterpart twice by 2-1 and 1-0 goals in South Asian Games 1991 and 1999 respectively, but they failed to register a victory against India in their last 12 attempts. However, Bangladesh lost 15 and drew 12 out of 29 matches at the senior level.

The first half ended goalless as both teams failed to take the lead despite creating some close chances. The first chance came to Bangladesh in the 9th minute while long-throw specialist Rahmat threw the ball inside the box; Rakib floated with a back header, Tariq Kazi failed to connect it.

The second chance came after in the 31 minute. Jamie Day made some changes to his plan and sent forward Md Ibrahim in the place of Masuk Mia Jony. Ibrahim was out of the camp for 13 days due to testing COVID-19, joined the team just 3 days before the campaign. However, the pair of Ibrahim and Matin created a chance from the left flank from a counter-attack in the 40th minute, but the Indian defenders wasted their efforts.

The Indian side, which started to play pressing football from the very beginning, got the first chance in the 11th minute. Midfielder Bipin Singh shot the ball into the box, but Topu cleared it. Just after four minutes, forward Manvir Singh took a chance from the left flank, but again Topu smartly cleared the ball from the danger zone.

In the 18th minute, goalkeeper Anisur Rahman Zico saved his post while midfielder Udanta Singh directly shot the ball towards him. India perhaps lost the golden chance of the first half in the 35th minute. Unmarked defender Chinglensana Singh created space and sent the ball with a low header off a corner kick, but Riyadul Hasan denied his effort saving the ball from the goal line.

In the second half, India appeared on the field with a new plan and two fresh legs – midfielders Md Ashique and Md Yasir in the places of Bipin and Udanta. On the other hand, Bangladesh kept faith in the same players.

India started to put pressure on Bangladesh defenders from the beginning of this half. In the 63rd minute, India got another close chance, but Chhetri, who was unmarked inside the box, headed the ball the wrong way while midfielder Brandon Fernandes sent him it from a direct free kick.

But the Indian captain made no mistakes in the 79th minute and took the lead utilising Bangladesh’s defence errors. Chhetri brilliantly headed the ball while Ashique sent him a long accurate cross from the right side of the six-yard box to the centre of the goal.

Chhetri completed a brace and sealed the fate of the match just a few seconds before the final whistle in the 92 minute of the game. He buried the ball into the net with a brilliant first touch as the ball raced past the Bangladesh goalkeeper in the top left corner.