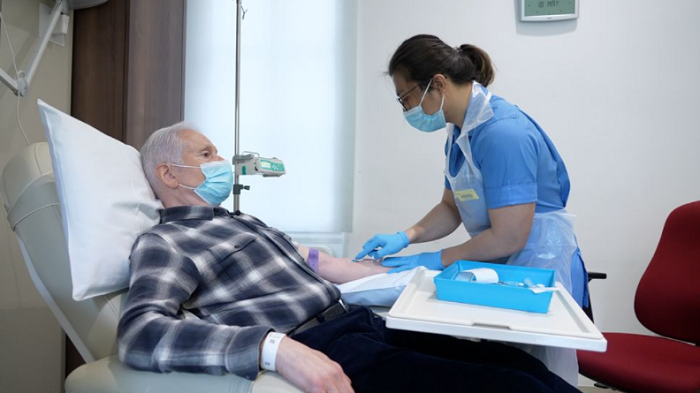 The first new treatment for Alzheimer's disease for nearly 20 years has been approved by regulators in the United States, paving the way for its use in the UK.

Aducanumab targets the underlying cause of Alzheimer's, the most common form of dementia, rather than its symptoms.

At least 100,000 people in the UK with a mild form of the disease could be suitable for the drug.

But approval from the UK regulator could take more than a year.

Charities have welcomed the news.

Aducanumab targets amyloid, a protein that forms abnormal clumps in the brains of people with Alzheimer's that can damage cells and trigger dementia, including:

In March 2019, late-stage international trials of aducanumab, involving about 3,000 patients, were halted when analysis showed it was no better, given as a monthly infusion, at slowing the deterioration of memory and thinking problems than a dummy drug.

After his diagnosis, the 68-year-old, who is originally from Glasgow and now lives in Oxfordshire, close to his family, had to give up his job, as a surgeon.

But participating in the trial, at the National Hospital for Neurology and Neurosurgery, in London, has kept him busy

"I'm quite happy to volunteer," he says.

"I really, really enjoy this journey that I'm going through - and obviously the benefits I'm getting from it, which I'm very, very grateful for.

"Although it's still there, it's not quite as bad.

"And I'm just getting that bit more confident now.

"I haven't caught up to the level that I was before.

"But I'm heading in the right direction."
More than 30 million people around the world are thought to have Alzheimer's, with most aged over 65.

For the about 500,000 in the UK, those eligible for aducanumab will:

probably require a definitive diagnosis, involving a detailed 3D brain scan
be mostly in their in their 60s or 70s and at an early stage
In the past decade, more than 100 potential Alzheimer's treatments have flopped.

Aducanumab is not a miracle drug, and many doctors are doubtful of its benefits - but its approval in the US will be a huge boost to dementia research, which has traditionally been underfunded compared to cancer or heart disease.

Aldo first started on the drug in February 2017, and was on the treatment for two years until trials were halted in 2019. There was a pause of almost two years before another trial began.

Despite the pause, Aldo says his family have noticed some improvements.

"Before, if I was going to get something I couldn't remember, you know, where to find things in the kitchen. That has become less of a problem.