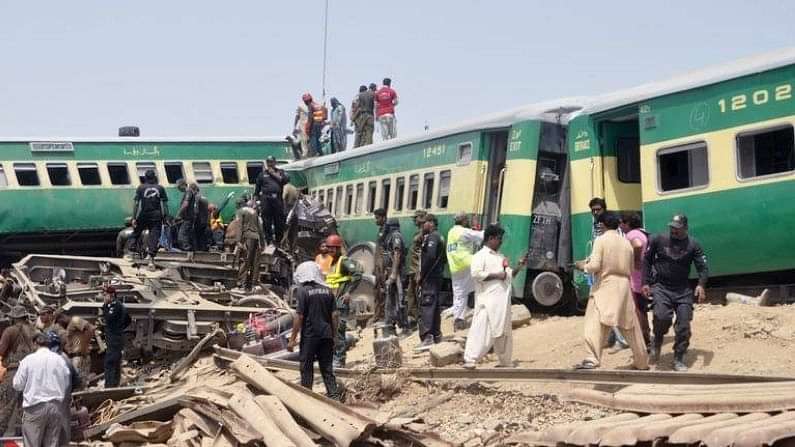 At least 34 people were killed and dozens injured Monday when a packed Pakistani inter-city train ploughed into another express that had derailed earlier, officials said.

An unknown number of people were still trapped in the mangled wreckage of carriages near Daharki in a remote part of Sindh province, a railway spokesman said, adding rescuers had called urgently for specialist equipment to help cut them out.

“The site is far and that’s why we are facing some trouble in the rescue work,” he said, adding at least six wagons were destroyed in the accident.

Huge crowds of people gathered around the carnage of several overturned Pakistan Railways carriages, some climbing on top of the mangled wreckage in an attempt to reach survivors and bodies, in footage aired by local media.

Villagers were the first to rush to the site, with rescue workers later trying to cut their way through shredded and protruding metal.

Bodies were laid out in rows on train benches and covered in traditional scarves.

One clip showed medics giving an intravenous drip to a conscious passenger whose lower torso was trapped between crushed carriage benches.

The accident happened on a raised section of track surrounded by lush farmlands.

The Millat Express was heading from Karachi to Sargodha when it derailed before dawn, spilling carriages onto the track carrying the Sir Syed Express from Rawalpindi in the opposite direction.

Prime Minister Imran Khan said he was “shocked” by the accident and promised a full inquiry.

Lieutenant General Akhtar Nawaz Satti, chairman of the National Disaster Management Authority, told private TV channel ARY that the Pakistan army and paramilitary rangers had already reached the site from nearby bases to help with the operation.

Rail accidents are common in Pakistan, which inherited thousands of kilometres (miles) of track and trains from former colonial power Britain.

But the network has seen decades of decline due to corruption, mismanagement and lack of investment.

More than 300 people were killed and 700 injured in 1990 when an overloaded 16-carriage inter-city train crashed into a stationary freight train near the city of Sukkur in Sindh.

More recently, at least 75 people died when a train caught fire while travelling from Karachi to Rawalpindi in October 2019.