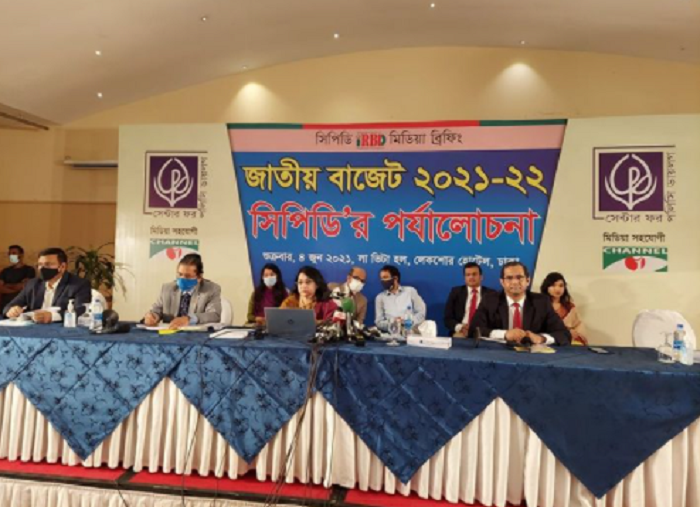 The proposed national budget for 2021-2022 fiscal year lacks a clear outline to protect the lives and livelihoods of people while it has failed to spell out ways to overcome implementation challenges, Centre for Policy Dialogue (CPD) observed on Friday.

“The budget doesn’t seem to recognise the implementation challenges and so, it has not spelled out ways to overcome those. Nothing has been mentioned about the capacity development, stronger monitoring and evaluation, results-based framework towards better implementation of the budgetary proposals,” said CPD Executive Director Fahmida Khatun.

CPD, a non-governmental economic think tank, came up with the observations on the national budget, which was placed in Parliament on Thursday, at a press conference at a city hotel.

The CPD executive director said the proposed targets in the new budget are far from reality if the actual scenario at the end of the ongoing fiscal year (FY21) is taken into consideration.

In the budget, it has been mentioned that health, agriculture and employment generation have been given priority while allocating resources for ADP.

However, the actual allocation does not reflect this as these promises have not been supported by adequate resources, said Fahmida Khatun. “Unlike last year, there has been clarity of thoughts about Covid management in the budget documents, but it has no similarity to the measures and allocations to tackle the challenges,” Fahmida Khatun added.

The budget documents refer to management of the Covid-19 situation which was absent during the first Covid budget (FY21), she said.

However, the budget does not have much to offer in terms of concrete measures and innovative policies to combat the Covid-induced challenges, the CPB executive director said.

Stating that the Health Ministry’s performance is the poorest in implementing the ADP, she said there will be no benefit if the allocation for the sector is enhanced without improving the institutional competence of the sector through reforms.

Some employment-generating and infrastructure development projects have not got ADP allocation in FY2, Fahmida Khatun added.

She said they had expectations that the health sector would get a much more allocation this time, but it has not happened.

CPD also stated that the allocation for the sector is 0.95 per cent of the GDP like last year. The total allocation has been increased to some extent, but there is no increase in absolute terms.

Fahmida Khatun said the allocation for the social safety net is not sufficient though it has been increased by several thousand crores Taka. “It remains at 3 per cent of GDP like the previous year. But the amount is negligible compared to the number of poor people in the country.”

She said the overall budgetary allocation for the agricultural sector has been decreased, but some steps have been taken and different facilities have been given for its development.

Given the current coronavirus-induced reality, the CPD chief said, the budget should have given necessary focus on job creation since many people have lost their jobs.

She said the government should have given more focus on the education sector in terms of allocation as academic activities have long been hampered due to the pandemic. “But we’ve seen a negligible rise in allocation for the sector,” she said.

Speaking at the programme, CPD Distinguished Fellow Prof Mustafizur Rahman said the tax break offered to businesses in the proposed budget for fiscal year 2021-22 will not bring much investment. “The private sector will not see any growth if Bangladesh can’t improve its business environment or its position on the Ease of Doing Business index. The government has to pay attention to this,” he said.