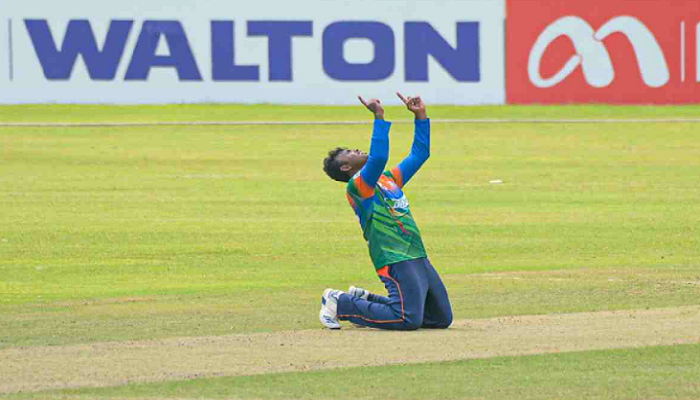 Pace-bowling all-rounder Alauddin Babu became the first player to claim a hattrick in the ongoing Bangabandhu Dhaka Premier Division T20 Cricket League as his career-best bowling figure of 4-21 inspired Brothers Union to earn an eight-wicket win over Legends of Rupganj in Dhaka on Thursday.

Abahani Limited completed their second successive victory to climb to the top of the points table but not before Old DOHS, who are backed by the same group of people, demonstrated a disputable batting effort in a low-run chase.

Alauddin, who removed Muktar Ali and Sohag Gazi in the last two balls of his third over, dismissed Nabil Samad in the first ball of his fourth over to not only complete his hattrick but also bowl out Rupganj for 111 runs in 19.1 overs.

Brothers’ skipper Mizanur Rahman then struck 74 off 52 balls to power his side to 112-2 in 15.3 overs to complete their first win in the meet.

Abahani had Mohammad Saifuddin to thank for his 19-ball 40 while Afif Hossain, who was dropped twice, made 27 not out as they scored 135-6 in a rain-reduced 19-over per side match after they were reduced at 72-5.

Despite wickets in hand, Old DOHS couldn’t accelerate their innings in the chase as they could make only 113-3 in 19 overs to concede a defeat of 22 runs in D/L method.