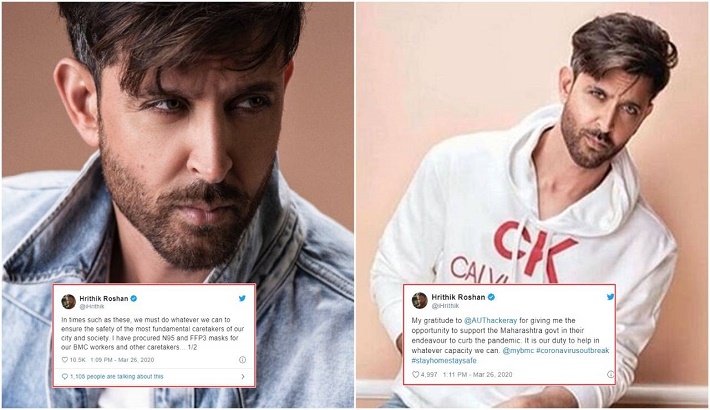 Bollywood actor Hrithik Roshan has come to the rescue of his fellow members of Cine and TV Artistes' Association (CINTAA).

The actor has donated Rs 20 lakh to the association and also provided ration kits to them to help out those members who are below poverty line.

General secretary of CINTAA, Amit Behl confirmed the same, adding, "Hrithik Roshan had helped us during the last lockdown too; he had donated Rs 25 lakh. This time, the money he gives us will be utilised in getting 5000 members of the association vaccinated and help members below the poverty line with ration''.

About 60 per cent of CINTAA members are daily wage workers who have been most hit due to the new SOPs of the government as it prevents them from getting work.

In the past too, especially during the first outbreak, a lot of celebs had come forward to help the daily wage earners of the fraternity. Anushka Sharma-Virat Kohli, Priyanka Chopra-Nick Jonas, Akshay Kumar-Twinkle Khanna, Salman Khan amongst others raised money and also contributed with theirs to help the industry tackle the testing times.

(With Times of India inputs)