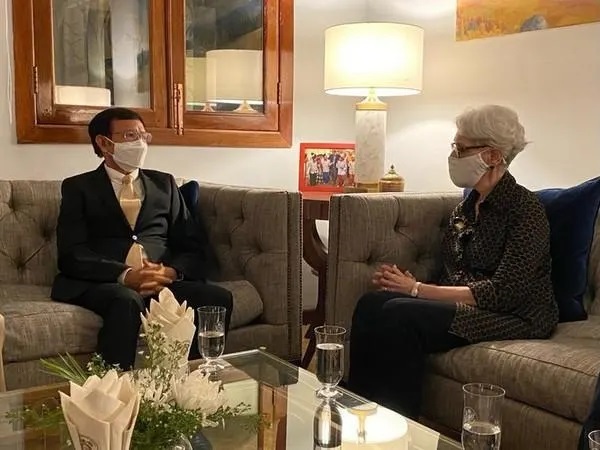 A US senior diplomat has flagged Washington's "serious concerns" about China's "military presence" at a naval base undergoing Beijing-backed expansion on Cambodia's coast and sought clarification on the demolition of US-funded buildings in the area.

Wendy Sherman, the deputy secretary of state, made the remarks during a two-hour meeting with Cambodian Prime Minister Hun Sen on Tuesday in Phnom Penh amid her 11-day diplomatic tour in Southeast Asia.

"Deputy Secretary Sherman expressed serious concerns about the PRC's (People's Republic of China) military presence and construction of facilities at Ream Naval Base on the Gulf of Thailand," the US State Department said in a statement.

Last month, the Cambodian Prime Minister had defended his close ties with China while speaking at a conference. "A potential flashpoint in the region has been Ream Naval Base in Cambodia's Sihanoukville Province -- facing the Gulf of Thailand -- where China is backing an expansion of facilities," a Nikkei report stated.

In a March hearing at the US Senate Armed Services Committee, a former US commander of the US Indo-Pacific Command told lawmakers that in September last year, Cambodia razed a US-built facility on Ream Naval Base that served as the headquarters for the National Committee on Maritime Security.

During the meeting, the US diplomat also sought clarification on the demolition of two US-funded buildings at Ream "without notification or explanation". She further "observed that a PRC military base in Cambodia would undermine its sovereignty, threaten regional security, and negatively impact US-Cambodia relations."

"The Deputy urged Cambodia's leadership to maintain an independent and balanced foreign policy, in the best interests of the Cambodian people," the statement added.

According to the Hong Kong-based newspaper, Hun Sen has become increasingly close to China as the United States has condemned human rights abuses and his demolition of the political opposition.