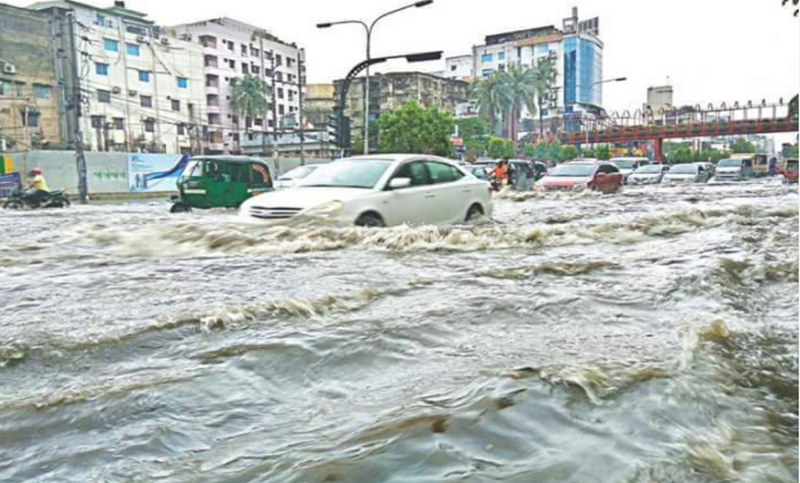 Intermittent showers swamped many parts of the capital Dhaka on Tuesday morning, throwing its residents into disarray.

The Meteorological Department recorded 85 mm of rain between 6:00 am and 9:00 am in Dhaka.

Due to the showers, many roads and lanes in the city’s Khilkhet, Mohakhlai, Kakrail, Mouchak, Malibagh, Mirpur, Kazipara, Shewrapara, Motijheel, Shantinagar, Razarbagh, Arambagh and Merul Badda were submerged as the capital's clogged drains failed to absorb the rainwater.

The rain slowed down vehicular movement leading to nagging traffic jam on the roads, creating immense suffering to the commuters.

Many of the commuters were seen to wade through knee-deep water on the roads.

They alleged that rickshaw and CNG-run auto-rickshaw drivers charged them excessive fares, taking advantage of the inclement weather.

Mohammad Aftab Uddin, a meteorologist, said, “The capital is likely to receive light to moderate showers on Wednesday too."
According to regular forecast, light to moderate showers, accompanied by temporary gusty or squally winds, are likely to hit Dhaka, Mymensingh, Khulna, Barishal, Chattogram and Sylhet divisions.
A few places in Rangpur and Rajshahi divisions may also receive moderate to heavy showers, as per the forecast. Day and night temperatures are likely to remain the same across the country.