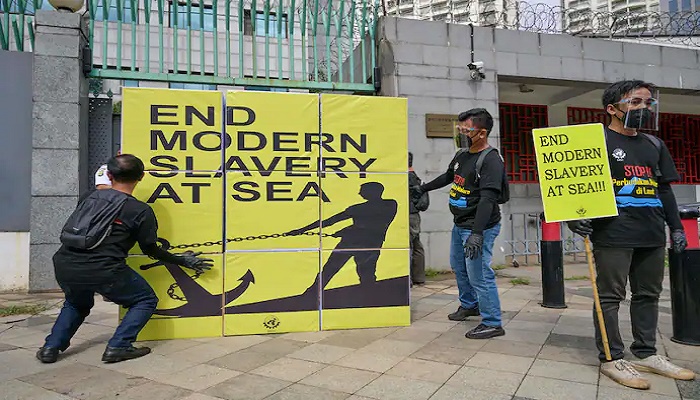 The United States has banned the import of seafood from a fleet of Chinese vessels that it accused of exploiting forced laborers, the latest in a string of similar bans taken against Chinese companies.

Customs and Border Protection officials said Friday that their year-long investigation found all of the main signs of forced labor on the 32 vessels owned or operated by Dalian Ocean Fishing Co., Ltd., including physical violence against workers, withholding of wages and restriction of movement. Most of the workers were Indonesians, CBP said.

It was the first time CBP has issued a so-called Withhold Release Order, which instructs border agents to impound arriving products, against an entire fleet, as opposed to single vessels. Dalian Ocean Fishing is based in the northern port city of Dalian, near China’s border with North Korea.

China has been a major target of import bans in recent years over forced-labor concerns. In January, the U.S. prohibited the import of cotton and tomato products from China’s Xinjiang region, where U.S. officials say authorities have carried out a broad campaign of repression against the Muslim Uyghur population, including compelling people to work under forced-labor conditions.

In September, the United States banned the import of certain apparel and computer parts from China, saying they were made by forced laborers from Xinjiang.

“Companies that exploit their workers have no place doing business in the United States,” Secretary of Homeland Security Alejandro N. Mayorkas, who oversees CBP, said in a statement Friday. “Products made from forced labor not only exploit workers, but hurt American businesses and expose consumers to unethical purchases."

In a call with journalists, Mayorkas estimated that forced labor generates up to $150 billion in illicit profits every year around the globe. About 25 million workers are trapped in forced-labor conditions worldwide, according to the International Labour Organization, a United Nations agency.

Friday’s order affected tuna, swordfish and other seafood harvested by Dalian vessels. It also applies to end products such as canned tuna and pet food containing ingredients from the fleet.

In a statement, House Trade Subcommittee Chairman Earl Blumenauer (D-Ore.) applauded the ban, saying it had come “after several reports indicated that crew members aboard the fishing company have died due to harsh working conditions.”

The fishing industry is at high risk of forced labor because vessel owners often recruit vulnerable migrant workers and send them out to distant waters for months at a time, CBP said.

The agency in the past has issued WROs against several individual fishing vessels, including the Taiwan-owned ships Lien Yi Hsing No. 12 and Da Wang, and the Taiwanese-flagged Yu Long No. 2.

The Tariff Act of 1930 prohibits the import of merchandise produced by forced or indentured labor.