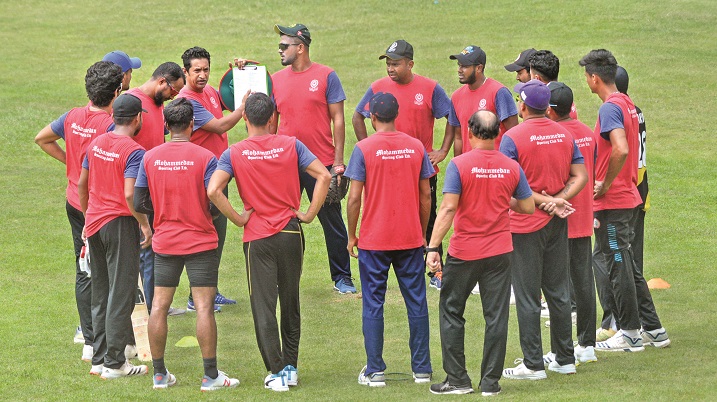 The DPL was earlier postponed on March 19 last year after just one round due to the outbreak of coronavirus in the country.

Cricket Committee of Dhaka Metropolis, a BCB wing entrusted with the responsibility of holding club-based leagues in Dhaka, decided that tough previous edition of the league is resumed it will start from the scratch.

A CCDM official said that they will host the league in T20-format instead of the usual 50-over competition as they have an eye on the next ICC World T20.

“We have decided to host the league in T20 format as we have in mind about the next ICC T20 World Cup,” CCDM chairman Kazi Inam told reporters at the Sher-e-Bangla National Stadium on Sunday after thanking Walton Group as they came forward to be the title sponsor of the competition.

All the 12 participating teams of the upcoming Dhaka Premier League entered their respective bio-bubble facilities on Saturday ahead of the domestic T20 competition.

The national cricketers, who were part of Bangladesh’s recently-concluded ODI series against Sri Lanka, entered DPL bio-bubble after undergoing a mandatory Covid-19 test while they are allowed to take their family with them as they were away from them for a long period due to their recent ODI series.

The teams are staying at four city hotels – Amari Dhaka, The Westin Dhaka and Four Points by Sheraton Dhaka and InterContinental Dhaka as Bangladesh Cricket Board is spending nearly TK seven crore for setting up these secure systems.

Abahani Limited will face Partex Sporting Club in the opening match of the competition at the Sher-e-Bangla National Stadium in the capital as a total of six matches will take place on each match day.

The league will be hosted in three different venues --- Sher-e-Bangla National Stadium, BKSP-3 and BKSP-4.

BCB announced on Sunday that due to Covid-19 safety and security protocol restrictions, media representatives will not have access to cover matches at the BKSP but added that the league will be live-streamed.

Shakib Al Hasan, who returned to DPL after a gap of five years, after choosing to skip PSL and instead lead MSC in the domestic league, missed the lone practice session on Sunday at the BCB academy premises that was crowded with members of different teams taking last-minute preparation.

MSC officials said that they have rested him as he is continuously playing and needed some rest so that he can start the league with fresh legs.

Sheikh Jamal official insisted that Mashrafe Mortaza is expected to join them at the later part of the league as he citied fitness issues.

‘’I am not playing from the start. Let see if I can take part in the later part of the tournament,’’ said

Mohammad Saifuddin, who missed the last ODI’s against Sri Lanka as he had shown sign of concussion after being hit on the head, said that he is totally fine and added that he could have played the last game but physiotherapist Julian Calefato didn’t want to take any risk with him.

“I am fine. I could have played the last game but physiotherapist Julian didn’t take any risk with me,” said Saifuddin.

Meanwhile, Tamim Iqbal will not lead Prime Bank in the tournament. According to sources he wants to play freely in T20 format and as a result opted to step down from the role of captaincy.