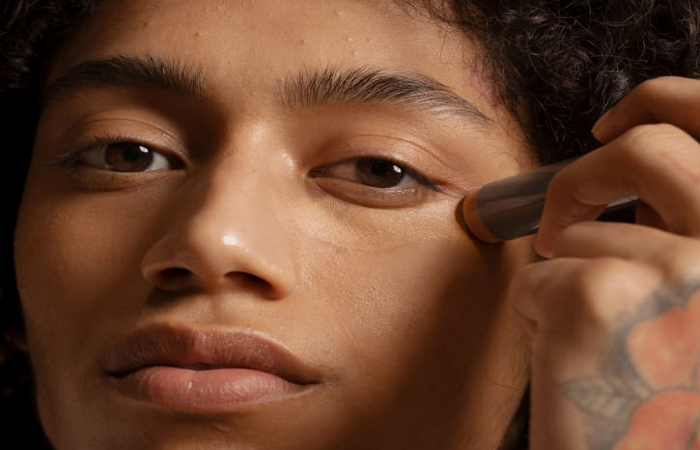 Former baseball pro Alex Rodriguez is not your typical makeup customer. Straight, Gen X and traditionally masculine, he's perhaps one of the last celebrities you would expect to launch a beauty product. And yet, last week, he did just that.

In a new campaign for men's wellness brand Hims, ARod unveiled his new "Blur Stick" concealer, described in a press release as a "skincare solution developed specifically for men." Available in eight different shades and packed into gray Chapstick-sized tubes, the product is also modeled by the star, who was an early investor in Hims.

In a series of muted promotional photos, a plainly dressed ARod looks into a mirror as he applies concealer to his cheeks in a nondescript room. In contrast to the usual fanfare of celebrity beauty launches, the campaign feels almost deliberately ordinary.

It gives the impression that applying makeup is a simple, unremarkable part of the star's daily routine. And for a growing number of men like ARod, it is.

Interest in men's makeup appears to be growing in the West -- especially among Gen Z consumers. A 2019 survey by research firm Morning Consult found that a third of American men under 30 would "consider" wearing it. Men's lifestyle retailers like Mr Porter and Mankind now have dedicated makeup categories on their websites, affording a level of anonymity to buyers experimenting with products for the first time.

Mr Porter introduced makeup to its site in 2017, with Tom Ford Beauty's brow gel, and has reported increasing demand since. This success led the retailer to begin selling a dedicated men's makeup line, War Paint for Men, last year. The site now stocks over 39 makeup products from seven brands. "It's one of our biggest growing categories this year," said buying director Sam Kershaw in an email interview.

Kershaw added that interest came from "across a broad age spectrum," with Mr Porter's male makeup sales growing a third over the past year. This is, he said, partly due to changing attitudes towards skincare and an increased awareness of anti-aging products.

"The most notable change in the grooming space over the past few years is the rise in men's makeup as a hack to grooming," Kershaw said. "The general acceptance of the category has grown, and it's no-longer associated with a deliberate function in the entertainment industry, where you always have to be camera-ready."

Mr Porter's best-sellers include "concealers and tinted moisturizers" Kershaw said, adding: "Our customers are showing a strong demand for products that cover up blemishes and skin discoloration, perhaps largely due to Zoom fatigue during the pandemic."

A little touch up
In the case of men like ARod -- and "Judas and the Black Messiah" star Daniel Kaluuya, who made headlines in 2018 when he wore foundation by Rihanna's Fenty Beauty on the Oscars red carpet -- makeup may be less about colorful self-expression and more about subtle self-enhancement.

There is now an abundance of "natural" makeup tutorials for men on YouTube. Australian musician Troye Sivan's "Epic No Makeup-Makeup Routine" video, produced by Vogue, has been viewed over 4.3 million times. Elsewhere, two "Makeup for Men" videos with Fenty Beauty makeup artist Hector Espinal have collectively drummed up over 1.5 million views.

Kershaw suggested that Covid-19 lockdowns have presented men with an "opportunity to experiment more than usual with self-care" -- all in the comfort of their own home. "Alongside makeup, we have seen LED face masks and tools such as face scrubs surge in popularity throughout this period," he added.

In Asia, the male makeup sector has been growing for some time. Chinese e-retailer TMall reported in 2019 that sales of male beauty products had surged by more than 50% for two consecutive years, with a huge growth of interest in eyebrow pencils and lipsticks, according to state media. In South Korea, boy bands such as BTS have fronted makeup campaigns, while the beauty brand AmorePacific estimated that 70% of men in the military use cosmetics -- leading it to launch a special military line, featuring natural camouflage makeup and post-training cooling and whitening masks.

In the West, appealing to males customers' machismo appears to be a particularly popular brand strategy. War Paint For Men, for example, has tapped traditionally masculine brand ambassadors, including professional rugby and football teams in England, as well as James Bond makeup artist Donald Mowat.

This may all help brands differentiate their products from those found in the female-dominated makeup industry -- or those used by the LGBTQ communities that have defined the male makeup space through drag culture and beauty YouTubers like Bretman Rock.

But the future of makeup could be increasingly unisex. Earlier this year, research firm NPD Group reportedly found that almost 40% of adults aged between 18 and 22 showed interest in gender-neutral beauty products.

A number of genderless beauty brands, such as We Are Fluide and Milk Makeup, have emerged in recent years. Rihanna has also declared that Fenty Beauty is "for my fellas too," having appointed A$AP Rocky and Lil Nas X as brand ambassadors.

Rapper Lil Yachty, meanwhile, has announced the launch of a nail polish line (or "nail paint," as he described it) for "all genders." The debut collection set comes with three nail polish pens, a nail clipping and filing tool, and nail art stickers. It is being marketed under the tagline, "For you, not them."

"If you find painting your nails is a way to show your creative side or it's an aesthetic that fits you, you shouldn't be judged for it," Lil Yachty is quoted as saying on the product website. "Outside opinion shouldn't have an effect on your aesthetic and whatever you decide to do and this line is a reflection of that."