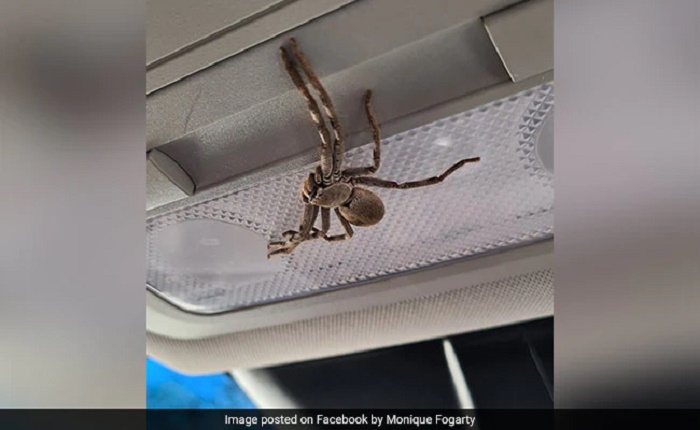 A woman driving at 100 km/hr on the highway received the shock of her life when she saw a huge Huntsman spider crawling out from behind her rear view mirror. Monique Fogarty was travelling down a highway in Australia when she saw the arachnid. Luckily for her, she was able to stay calm after the first shock of seeing the huge spider and drove on safely until she could pull over.

Ms Fogarty was driving down the Tuggeranong Parkway - a major motorway in Canberra - when the spider made its appearance.

"I squealed as it gave me a fright when it came out of nowhere," she told Daily Mail Australia. "But after the initial fright I was calm and unbothered."

She even took a picture of the Huntsman spider and shared it on Facebook. "Am I right in guessing this is a huntsman that almost killed me by popping out from behind my rear vision mirror while I was going 100km/h ," she wrote while sharing the pic on a public spider identification group on Facebook.

The painting has garnered hundreds of feedback and several comments.

"Hahahaha my second worst fear, right behind a snake doing the same thing," wrote one person in the comments section.

"I live in Australia and don't think I'll be going in my car for a few days..." another declared.

"How do they get in? Can they sneak in when the door is open?" a Facebook user wondered. To this, Ms Fogarty responded by saying that spider manage to get in through small gaps and that she had seen this particular Huntsman a handful of times inside her car over the last couple of months. " I've seen this guy a few times in different areas of my car over the last couple months so I'm glad I finally got him out. He always came in through my front air vent," she said.

Huntsman spiders are notorious for entering cars. According to the Australian Museum, they are often discovered hiding behind sun visors or running across the dashboard.