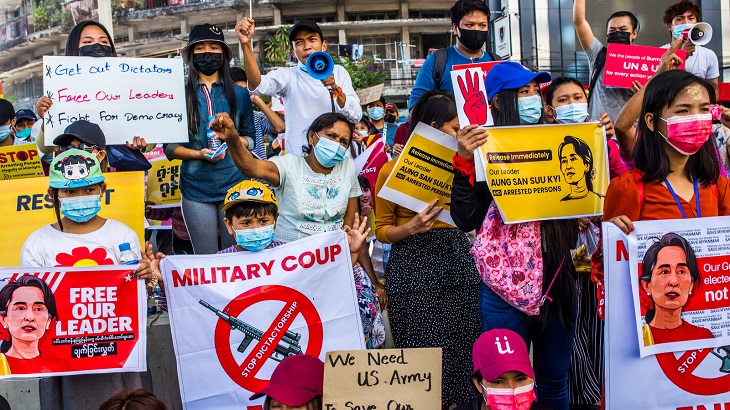 The UK Government should take immediate action to deprive the Myanmar military junta of natural gas revenues, weapons, and political legitimacy, and ensure accountability for its past and present mass atrocity crimes in the country, Fortify Rights said on Tuesday (May 25) in a submission to the UK Parliament.

Fortify Rights Tuesday submitted evidence to the UK Foreign Affairs Committee, which is holding an inquiry into the UK government’s response to the crisis in Myanmar following the February 1 coup d’état.

“The UK can and should do more to end the junta’s impunity and ongoing reign of terror,” said Matthew Smith, Chief Executive Officer of Fortify Rights.

“The targeted sanctions imposed to date are important but incomplete. The UK should join other governments to deprive the junta of its financial lifelines and means of killing, while also redoubling support for human rights and accountability.”

The Fortify Rights submission recommends the UK “work with relevant governments and foreign operators of Myanmar gas fields to ensure the junta is unable to access natural gas revenues from its accounts and ensure revenues are effectively held in trust until democracy is restored.”

Fortify Rights urged the UK to sanction the Myanma Oil and Gas Enterprise and other specified entities to ensure the country’s natural gas wealth is not controlled by the illegal military junta.

As the penholder at the UN Security Council, the UK should table a resolution that includes a global arms embargo, targeted sanctions, and a referral of the situation in Myanmar to the International Criminal Court (ICC), forcing a veto from China or Russia, if necessary, Fortify Rights said.

The UK should simultaneously lead efforts beyond the Security Council to build an international coalition to achieve these same aims.

Fortify Rights also called on the UK government to reverse recently announced funding cuts to Rohingya refugee response efforts in Bangladesh and to conduct an urgent public review of UK aid spending in Myanmar to ensure it does not reach the military junta.

In November 2019, The Gambia opened a case against Myanmar at the International Court of Justice (ICJ) in The Hague, alleging Myanmar violated its obligations under the Genocide Convention with regard to mass-scale, army-led attacks against Rohingya men, women, and children.

In light of the coup, long-persecuted minorities in Myanmar, such as the Rohingya, face increased existential risks, Fortify Rights said.

“The UK should formally join the case at the ICJ brought by The Gambia against Myanmar for violations of the Genocide Convention,” Fortify Rights said in its submission.

Since the coup, the junta-controlled military and police reportedly killed more than 800 people and arbitrarily detained more than 4,000 nationwide.

In a document seen by Fortify Rights, provided by the Myanmar junta to members of the Association of Southeast Asian Nations (ASEAN) ahead of an emergency summit to discuss Myanmar last month, the junta claimed it detained 9,848 persons, released 4,511, and charged 5,070 between February 1 and April 15.

The junta has also launched airstrikes against villages in ethnic army-controlled border areas, reportedly killing, injuring, and displacing tens of thousands of civilians. The junta also cut internet access and mobile data nationally, preventing the population from communicating with each other and the outside world.

“The UK must acknowledge that the sovereignty of a country resides with the people and their duly elected government, not with those who hold the most guns,” said Matthew Smith. “At the same time, the NUG must promote and protect the human rights of all, including the Rohingya, whom the previous civilian government failed to protect from genocide.”

“This urgent inquiry will determine how the Government can improve its response to the crisis, as well as how the U.K. can use its influence in organizations such as the U.N. to help deliver a peaceful resolution for the people of Myanmar,” he said.