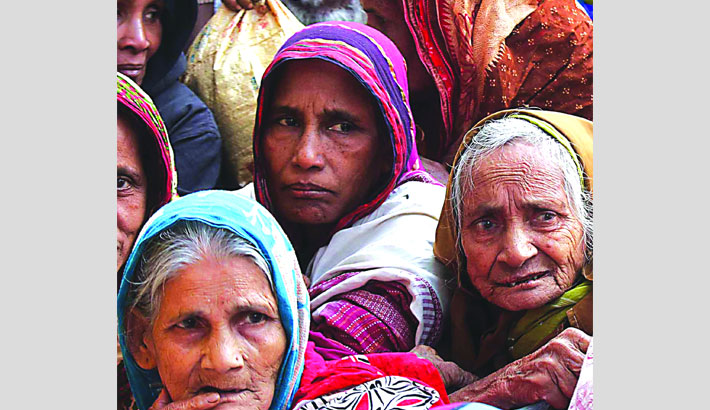 The government is going to expand its social safety net in the upcoming budget in a bid to safeguard people whose livelihoods have become vulnerable due to the ongoing coronavirus pandemic alongside the poor ones.

As part of the move, all the aged population and widowed and abandoned women of 150 upazilas will get allowances in the next fiscal year while affected transport workers will get social protection and freedom fighters will get higher allowance.

At present, all the aged population, and widowed and abandoned women of 122 upazilas are getting government allowances.

In total, 12 million people of the country may be brought under the government’s wider social safety net in the next fiscal year, official sources said.

The Ministry of Social Welfare has prepared a draft of social protection plan for the new budget which will be finalised after discussion with Finance Minister AHM Mustafa Kamal, according to the ministry sources.

Some studies showed that some 26 million people have become new poor due to the coronavirus onslaught, a finding the finance minister has not fully agreed to. Besides, a good number of people have been left jobless by the pandemic.

The number of widowed and abandoned women to get allowances in all 150 upazilas will stand at 24.75 lakh from existing 20.50 lakh. The allocation for this will rise to Tk 12.38 billion from the current fiscal year’s Tk 12.30 billion.

Besides, 18 lakh insolvent people with disabilities and 2.75 lakh lactating mothers will get allowance, 7.70 lakh poor women will get pregnancy allowance and freedom fighters or their families will get higher allowance in the new budget.

The amount of freedom fighters’ allowance may rise from existing monthly Tk 12,000 to Tk 20,000 from the next fiscal year in line with Prime Minister Sheikh Hasina’s announcement.

The number of beneficiaries of transgender people, gypsies and disadvantaged population will rise to 95,000 from existing 86,000.

Road and waterway transport workers are being included anew in the government social safety net schemes as their livelihoods have been put in danger with the lockdown after the 2nd wave of coronavirus hit the country.

The government is mulling over providing Tk 2,500 in cash incentive for each transport worker affected by the lockdown, for which a specific amount of money will be kept aside.

The government has already provided the same amount of cash incentive as the prime minister’s Eid gift for 3.5 million jobless people, including some transport workers.

Excluding those, the lists of the affected transport workers have been sought from deputy commissioners. After getting the lists, the cash incentives will be provided through mobile financial services.

In ongoing 2020-21 fiscal year, the government allocated Tk 955.74 billion for social protection which drew flak for incorporating interests paid on savings certificates in it. In the revised budget for FY20, the allocation was Tk 818.65 billion.

These programmes need to be better coordinated and integrated under a coherent institutional framework to ensure inclusive coverage of vulnerable populations to reduce social economic risks, food shortages and related hardships, says the International Labour Organization.