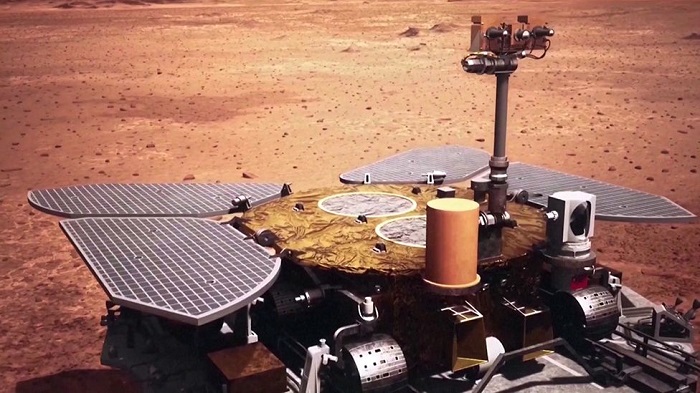 China has released the first pictures taken by its Zhurong rover on Mars.

The forward view shows the landscape ahead of the robot as it sits on its landing platform; the rear-looking image reveals Zhurong's solar panels.

The rover touched down on the Red Planet early on Sunday, Beijing time.

In doing so, it made China only the second nation - after America - to successfully put a probe on the surface of Mars and operate it for a significant length of time.

Chinese scientists hope get at least 90 Martian days of service out of the six-wheeled robot at its location on Utopia Planitia, a vast terrain in the planet's northern hemisphere.

China's National Space Administration (CNSA) posted the pictures on its website. There are even a couple of short videos that record the moment the rover's aeroshell - the capsule it used to enter the Martian atmosphere - departs the Tianwen-1 orbiter, the satellite that carried the rover from Earth.

The surface imagery tells us that critical hardware deployments after landing were completed cleanly.

These deployments included the unfurling of the solar arrays to provide power to the robot; the release of the antenna to communicate with Tianwen-1, and onwards with controllers back in China; and the extension of the ramp down which Zhurong will soon roll to begin its mobile mission.

Zhurong looks a lot like the US space agency's (Nasa) Spirit and Opportunity vehicles from the 2000s.

It weighs some 240kg. A tall mast carries cameras to take pictures and aid navigation; five additional instruments will investigate the mineralogy of local rocks and the general nature of the environment, including the weather.

Like the current American rovers (Curiosity and Perseverance), Zhurong has a laser tool to zap rocks to assess their chemistry. It also has a radar to look for sub-surface water-ice - a capability its American cousins don't share.
Utopia Planitia is where Nasa landed its Viking-2 mission in 1976.

It's a colossal basin - more than 3,000km across - that was formed by an impact early in Mars' history.

There is some evidence pointing to it having held an ocean long ago.

Remote sensing by satellites indicates there are significant stores of ice at depth.
America put down the much larger (one tonne) Perseverance robot in February.

Europe, which has twice failed with landing attempts, will send a rover called Rosalind Franklin to Mars next year (in a joint project with the Russians).