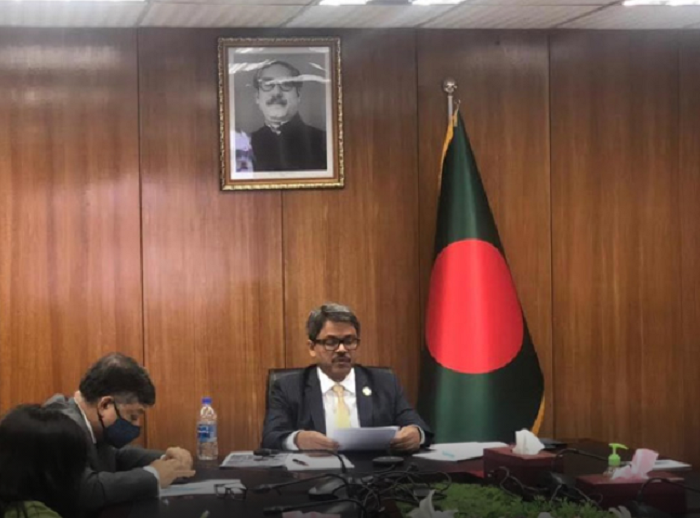 State Minister for Foreign Affairs Md. Shahriar Alam has said the international community, including the UN, must intensify their focus on the permanent solution, which lies in the sustainable return and reintegration of Rohingyas in Myanmar.

He made this remark on Tuesday at the launching ceremony of the 4th Joint Response Plan (JRP-2021) for humanitarian assistance for about a million Rohingyas temporarily sheltered in Bangladesh.

The State Minister in his speech emphasised the urgency of a permanent solution to the prolonged crisis that has created enormous strain on Bangladesh with multifarious ramification.

He stated that the Rohingyas were willing to return their homeland in safety, security and dignity at the earliest to get rid of the precarious and hopeless situation. However, any ray of hope was yet to be seen.

The State Minister He highlighted that it was the shared responsibility to find a way out to save the distressed Rohingyas from the uncertainties and safeguard the region.

He reiterated that the earliest repatriation of all displaced Rohingyas to their homeland in Rakhine remained a compelling priority for the government of Bangladesh.  Bangladesh was committed to ensure best possible humanitarian assistance during their temporary stay in Bangladesh.

State Minister Shahriar highlighted that in order to decongest and de-risk the camps, Bangladesh developed the Bhasan Char from her own resources with required amenities and better facilities to relocate there 100,000 Rohingyas from the highly disaster-prone camps in Cox’s Bazar and informed that so far over 18000 Rohingyas had already been shifted on voluntary basis.

He hoped that the United Nations agencies would commence their operation in Bhasan Char at the earliest.

While appreciating the persistent support of our international partners in humanitarian operation, the State Minister quoted the Prime Minister of Bangladesh that the return of Rohingyas to their homeland was the only solution to the crisis and the solution lied with Myanmar.

He emphasized that all undertakings under the JRP or any other funding mechanisms should be implemented keeping this over-arching objective in mind.

The State Minister underscored that the priority areas identified in the JRP must be aligned with the core objective of preparing the Rohingyas for their return. Any project such as education or skill development should be designed and implemented in ways that would help Rohingyas to integrate in their society upon their return to Myanmar.

The JRP has again brought together the efforts of the Government of Bangladesh, and 134 UN agencies and NGO partners to continue the humanitarian assistance for the Rohingyas as well as the host community affected by the massive influx.

Participants from UN Agencies, different stakeholders, NGOs and Permanent Representatives of a number of donor countries participated at the event.

Besides, Assistant Secretary for Population, Refugees, and Migration in the US State Department participated through a recorded statement informing that the US would make a contribution of US$ 155 million for the JRP 2021.

Many other donors announced their pledges while appreciating the generous role played by the Government of Bangladesh. Many speakers mentioned the relocation of the Rohingyas to the Bhasan Char and the need for further engagement of the United Nations and other stakeholders.